Joe J. Thomas
[view]
“We've been from country to country, but this land is especially unique. The oranges are luscious, and so are the women. Check...aaand check.”
—Randal in Echoes: Shadows of Valentia

Randal is an original character from the trading card game Fire Emblem 0 (Cipher). He is a DLC character in Fire Emblem Echoes: Shadows of Valentia.

He is a rugged Cavalier from Elibe, and a friend of Emma, Shade, and Yuzu.They are part of a traveling group that travel the lands, from continent to continent. Upon reaching Valentia, Randal and Emma eventually got lost from the rest of the travelers. They were attacked by the bandits that sought revenge by his cheating from some gambling Randal did the night before. While he took care of the great amount of the looters, the two were in a disadvantage by being in smaller number and his horse got hurt during the battle, resulting on Emma fleeing to seek help nearby. She eventually found Alm or Celica's army.

After defeating the bandits, Emma and Randal decide to join the party's cause, as a thanks for the help. He also asked to be guided during their stay in Valentia, wanting to know tips about the hottest spots.

Randal can look like a vagabond, he has a laid back personality, wandering from town to town and battle to battle. A man who loves gambling, he is often seen with dice on the battlefield.

At first glance, he seems uncaring and sloppy in appearance, yet he possesses much experience and tact–and is actually a reliable man with exceptional skills, since as a capable knight, he skillfully uses twin swords in battle. Although he hates trouble and danger, he usually ends up in the middle of it anyway.

Despite having a lot of patience and liking Emma very much, he sometimes get confused about how to behave when taking care of a kid, making irresponsible decisions like not giving up gambling and keeping with his messy habits. He often wonders how he got in such troublesome situation of needing to act as a caretaker of a child, needing to endure her silly childish ideas. This often leads to comical situations.

*Due to equipped Wayward Lance

Out of the 4 characters from Cipher, Randal is the one with the most potential. His base stats are great and his growths only help, with Attack, Skill and Speed being his best points, and HP being decent. While his base Attack isn't all that special, he can quickly make up with his growth, which is among the highest in the game. His Skill and Speed are above average, meaning that he'll easily hit and double enemies, while his Resistance is decent enough. His weapon reduces his Speed a bit, but that doesn't hinder him too much. Unlike the others Cipher characters, he can promote, meaning even more room to growth. Even if someone want to Overclass them, Randal will still have more promotions and as such more possibility for growing.

Despite his good points, Randal has his problems too. His Defense for an example. While he surpasses Clive and Mathilda, the latter can quickly catch up with her higher growth. Zeke and Conrad have more base Defense and growth, while Mycen's base Defense is just too high. Randal's other problematic stat is Luck, with his being really low, in both base and growth. Trying to raise his Luck is pretty much useless and it's better to just raise his Defense instead, which he'll definitely need.

Overall, Randal is a very good unit, who will be worth the effort of training and if someone manages to correct his defensive problem, he'll be unstoppable.

After the war, Randal departed Valentia for a new land. History makes no further mention of him, but some say he made a name for himself as a sellsword, gracing countless battlefields and wielding a variety of weapons—always with one in each hand.

Randal appears in the following cards: 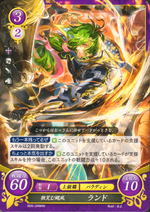 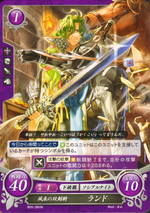 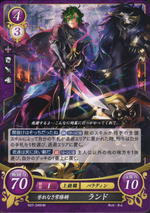 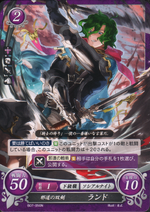 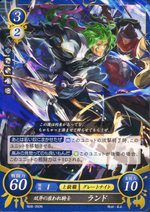 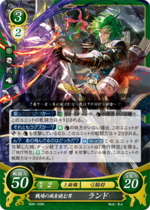 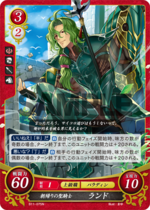 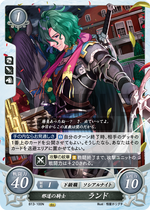 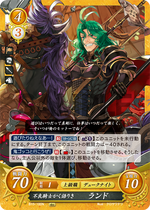 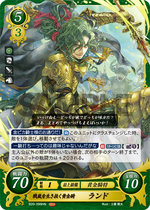 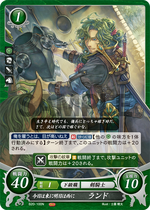 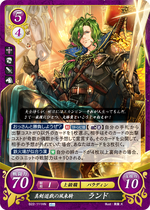 Randal is a variant spelling of the old english name Randall, which originated from the german Rudolf, meaning "Famous Wolf".