Chapter 7: Shades of Evil [joins in Chapter 23: The Great Bridge] (Path of Radiance)

Ed Bednarzik (Radiant Dawn)
Armen Taylor (Heroes)
[view]
“Thrown around by Skrimir, cornered by General Zelgius, and now this. Can someone tell me why I always seem to pull the short straw?”
—Ranulf, before he fights Nailah in Radiant Dawn.

Ranulf is a playable character from Fire Emblem: Path of Radiance and Fire Emblem: Radiant Dawn. He is a Cat Laguz, and is a trusted vassal of King Caineghis.

When Gallia sends an army to aid in the effort to liberate Crimea, Ranulf is sent as its commander.

After Ike's group manages to save a number of prisoners in Chapter 10, Ranulf proceeds to lead them to Port Toha and hire Nasir's services to safely transport them to the domains of Begnion. He later bumps into a passing Beorc woman quite by accident, revealing his true identity as a Laguz. She promptly reacts by shrieking the derogatory term "sub-human", attracting the attention of other passing civilians. Ranulf then finds himself the victim of their physical and verbal abuse, with one of them exclaiming that "stinking sub-humans need to learn [their] place". Ike, unable to quell his rage and confusion towards the civilians' hostile behavior towards his friend, proceeds to step in and guard Ranulf from sustaining any further violence from them. The civilians see his act of bravado as an act of betrayal to the Beorc race, whereupon they request aid from the Toha vigilantes to capture Ike's forces and hand them over to the Daein army.

When Ranulf is later questioned as to why he chose not to retaliate in the face of adversity, he admits that he is unable to jeopardize the alliance shared between Gallia and Crimea, regardless of the ill will the Crimeans bear towards him. After seeing Ike's forces off on Nasir's ship, Ranulf returns to the town square of Port Toha, where he chances upon the Black Knight. A duel will ensue between the two of them thereafter, where Ranulf discovers that he is unable to inflict any damage onto his opponent. As he faces imminent defeat at the Black Knight's hands, Sephiran warps into the vicinity and commands the Black Knight to step down, giving Ranulf the opportunity to make his escape.

Ranulf will later reappear before the battle in Chapter 23 breaks out, where he reveals that the Gallian elders have agreed to "lend [the country's] full support to Princess Crimea's efforts to liberate her homeland." He then joins the Crimean Liberation Army, aiding Ike's forces in the subsequent battles and skirmishes that they undertake.

After the Mad King Ashnard is defeated, Ranulf will bring Reyson, Leanne and Lorazieh back to Gallia as very important guests.

Ranulf returns in this game as a prominent figure in Gallia. When the Laguz Alliance declares war on the Begnion Empire in Part 3 of the game, Ranulf hires Ike and the Greil Mercenaries to fight for the Alliance. He is appointed as a sub-commander of the Gallian army, and serves under the brazen and rash Skrimir, who is revealed to be the promising successor and nephew to King Caineghis.

Ranulf is later spared when Ashera casts her judgment upon the continent of Tellius. He may be brought into the Tower of Guidance to reverse this judgment and restore peace amongst its inhabitants once again.

Ranulf is a bright and friendly individual, and has the tendency to be cheeky when he addresses others. He is also rather intuitive, and is the first character to realize that Zelgius is the Black Knight.

Ranulf is also one to not nurse grudges. This may be observed when Ike accidentally refers to the Laguz race as sub-humans, whereupon Ranulf, understanding that he lacks any knowledge of the Laguz at the time, takes his apology.

Ranulf's carefree attitude is a facade to his true nature of being fearless, a trait that may be observed in his numerous suicidal displays of courage. These may be observed in his attempts to challenge Zelgius, Skrimir, and even the Black Knight to duels, despite being fully aware of the obvious difference in strength.

Friend of Nations
A cat warrior from Gallia, the home of the beast tribe of laguz. Though young, his king trusts him deeply. Considered the right hand of the future king. Appears in Fire Emblem: Radiant Dawn.

Ranulf was often run ragged by advising the new king. While he winced at his duties, Ranulf still indulged Skrimir.

After seeing Skrimir crowned as king, Ranulf set off on a journey, saying only, "There's so much I haven't seen."

Ranulf: Ah, this is awful. What am I supposed to do if I can't fight? I'd make a terrible farmer... Blast! Sorry, Ike! I have to withdraw! Stay safe and win!

Ranulf: Arg! Like being hit...with a mountain...
Tibarn: Ranulf! Enough! Get back! I can't let you die! What would I tell King Caineghis and Skrimir?
Ranulf: ...I'm sorry, King Tibarn...

Ranulf: Ike... I'm leaving everything in your hands... With you in command, I know I can be at peace when I...

Ranulf is illustrated in the trading card game Fire Emblem Cipher with the following cards: 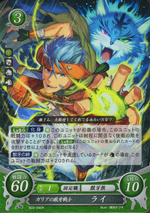 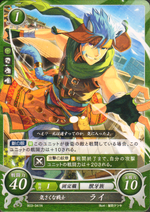 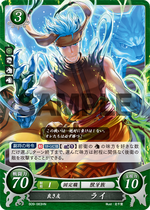 Ranulf is the Scottish transliteration of Randolf (Shield Wolf). The name, introduced by the Scandinavians, is derived from the Old Norse name Reginúlfr, and is composed of two elements: Regin, which means "advice" and "decision", and úlfr, which means "wolf".

Lay is a variant of Lea, Leah, Lee, Ley or Leigh, meaning "meadow" or "field".