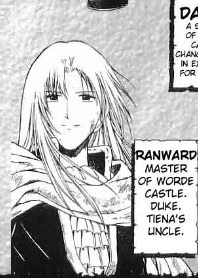 Lord Ranward is a manga character in Fire Emblem: Hasha no Tsurugi. As Tiena's uncle and master of Worde Castle, he is Marquess Worde.

When the Kingdom of Bern invaded Lycia, Ranward answered Lord Hector's call for troops to drive out the invaders. After the Lycian Army was defeated at Araphen, Worde Castle was burned down by Ranward's traitorous adviser Youzen, with help from a mage from Bern. With no castle and the army in disarray, Ranward was betrayed once more, by his retainer Danan, who handed his master over to Youzen in exchange for his own life.

Ranward was then imprisoned in Olst Castle, which had been given to Youzen by Bern. Ranward was eventually reunited with Tiena when she and her companions Al and Gant were captured by Youzen and Danan. Al managed to get the upper hand over Youzen, and with help from a guilt-ridden Danan, they managed to escape the castle.

As they made their escape from Olst, Ranward was assassinated by the mage who sacked Worde Castle. As he lay dying, he told Tiena about the dragon he witnessed on the battlefield fighting for Bern. He recognized the significance of their appearance, and pleaded with Tiena to find the Fire Emblem, and put an end the machinations of Bern.

Ranward in his battle armor.
Add a photo to this gallery
Retrieved from "https://fireemblem.fandom.com/wiki/Ranward?oldid=472491"
Community content is available under CC-BY-SA unless otherwise noted.