“I told you people a thousand times, I'm not joining your army. I refuse to kill other people. I'm sorry, but I must ask you to leave.”
—Raquel, upon first meeting Sasha and Eugen

Raquel (ラケル Rakeru) is a playable character from TearRing Saga: Utna Heroes Saga. She is a hunter who lives in a small village located north of the Gram Forest. Her unparalleled skill with the bow has earned her the title of the Child of Bridget. She has made a vow to never kill another person. She is also the older sister of Ruka.

Raquel is unique because she is the only combat unit who is unable to defeat any human enemies. However, this can be countered in a special event. In order to trigger it, Ruka must be recruited before Map 2 and visit Raquel's house in Map 4 before Sasha does. If both he and Raquel are sent with Runan's army after the second route split and fielded in Map 26A, there will be two options at the end of the chapter. If the player chooses the first one, Raquel will refuse to kill a wounded enemy soldier, which results in Eugen forcing her to leave the army. However, if the second option is chosen, she will witness Ruka's death at the hands of the soldier and break her vow, making her able to kill human enemies from that point on.

After most of the men in her village were killed in an attempt to stop bandits from claiming the women as their own, Raquel appeared from the woods and single-handedly fought all of them by herself. Instead of killing the bandits like many others would, she wounded them instead by shooting their legs. It was at this time that Ruka and the villagers first noted her resemblance to the goddess Bridget from the legends.

Raquel is introduced when she is residing in her village. It is mentioned that she has rejected offers from Eugen's messengers to enlist in Runan's army. However, if Sasha visits her home, she decides to join under the agreement that she does not have to kill anyone.

In the ending, Raquel continues to live the life of a hunter in her village. Before leaving, she asks Sasha to occasionally visit and cook with her.

Raquel is a humble woman who does not believe that she is the most skilled archer in her village like many others claim. Although she acknowledges herself as a fine cook, she is displeased by Ruka complaining about other food being of much lower quality than hers. She is implied to have a one-sided crush on Roger and becomes nervous around him. She also dislikes warfare, which is her reason as to why she initially refuses to join Runan's army.

Have Sasha visit the top left village in Map 4.

Raquel is a unit who is often overlooked because her inability to defeat human enemies, which limits her EXP intake for a large portion of the game, unless the player decides to kill off Ruka in Map 26A. However, it is not advised to overlook her; her bases are incredible, particularly in Speed, matching units like Loffaru in some stats, despite joining in the fourth chapter of the game. She is also noteworthy for her high base Weapon Level, making her able to wield a large variety of bows that the other archers, Rennie and especially Ruka, would take some time to reach. Her skillset is extremely useful, giving her 6 Movement on the abundant indoor and city chapters throughout the game, and allowing her to traverse quickly through the abundant forest tiles on forest-heavy maps. Her high Agility base and decent growth will allow her to activate Continue frequently, and with Elite, she gains sufficient EXP, despite never killing human enemies on the map. However, she is able to kill enemies for EXP in the arena (which she'll have little trouble doing due to her high stats), as well as monsters, including the weak but high EXP-yielding mummies. Her inability to kill human enemies, while seemingly a weakness, eventually becomes a strength; she can greatly weaken enemies so that training initially weak but worthwhile units like Sun becomes much easier. She does, however, have a relatively low Defense base and growth, so physical attackers can become a problem for her.

Raquel is the Spanish and Portuguese form of Rachel, a Hebrew name meaning "ewe". In the book of Genesis, Rachel was one of the wives of Jacob, and the mother of Joseph and Benjamin. 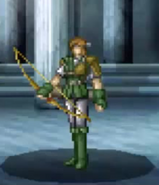