Jacob Cramer
[view]
“The battlefield is not a place for daydreaming.”
—Rath, in a support conversation with Lyn

As the son of the Silver Wolf, Rath was revered as the child with the most potential in the village. His achievements spread quickly through the village, even to Guy, who was never any good with a bow and spent most his time training his sword arm. Rath was banished from his village before the age of four, however, due to a prophecy that said he must leave the village to help "stop the burning". It is presumed that he fulfills this prophecy by joining Hector, Lyn and Eliwood's cause and helping to thwart Nergal's evil.

After leaving his village, Rath wandered the plains of Sacae for several years, always on the verge of starvation. The people of other tribes would laugh and ridicule him. Over time, he learned to no longer feel emotion, and was spared from the agonizing loneliness that he felt during his time wandering. Rath eventually began to work at the castle in Araphen, whose marquess was racist against Saceans.

On encountering Lyn's group in Chapter 6, Rath manages to save Castle Araphen with their aid. The marquess however, does not respect Lyn as a savior. Overhearing Marquess Araphen speaking down to Sacaeans while talking to himself, Rath leaves the service of Marquess Araphen. Upon this, Rath leaves Araphen and lends Lyn's party his aid. When the ordeal with Lundgren is over, he silently leaves the group.

Rath will appear again in Chapter 21E/22H, where he is revealed to have taken up work as a mercenary in the service of House Ostia. He, alongside the mercenary troupe he is in, accompanies a group of soldiers on a mission to reinforce Eliwood, Hector and Lyn's joint army. Should Lyn be directed to speak to him, he will reveal his role as a sellsword, and goes on to suggest lending his aid to her, which she readily accepts. After the end of this mission, Rath will continue to stick with the army until Nergal and his morphs are defeated.

At the end of this journey, Rath will return home to his tribe in Sacae, where he is received with admiration and praise. Depending on his supports, he could eventually wed Lyn, whereupon the couple will have a daughter together named Sue, who appears as a playable character in Fire Emblem: The Binding Blade.

As a result of his banishment in the early years of his life, Rath develops a taciturn, withdrawn personality, preferring to keep to his own devices instead of interacting with others. This continues well into his eventual entry into the civilisations that exist beyond Sacae, where his skills as a mercenary are lauded, yet he is not known for being warm and ready to mingle.

Rath is not completely devoid of emotions, however, as exemplified through his interactions with Lyn. Although his interactions with her may appear to be mostly unfeeling and lacking in genuine warmth, subtle hints point towards the feelings that he harbours, yet represses, for her. His re-appearance in Chapter 21E/22H, for one, sees Rath taking the initiative to offer aid to Lyn without being prompted, and to top this off, he also does not ask for any form of payment in return for his services.

Description: A young hired sword from the Kutolah tribe.

* Lyn's Route. Drops to 7 on Eliwood and Hector's route, but goes back to 8 upon promotion. **Lyn's Route. If Lyn mode was not selected, it starts at B Rank

Rath is the only choice for a Nomad in The Blazing Blade. Opinions differ on his overall effectiveness, but he is not bad. His Strength and Speed growths, which are all an archer really needs in The Blazing Blade, are rather competent. His HP growth is good as well, and he has a decent base Defense stat, even if his Defense growth is poor. As a man of a few words, Rath will let his bow do most of the talking. He is a good candidate to pair up with Guy, and Lyndis can be a suitable option as well. Unfortunately, Rath is unlikely to gain any benefits from Tactician Stars, owing to the relative rarity of his Affinity.

Rath rejoins the party much later in the game than his main competitors do, and is typically under-leveled relative to the rest of the army. Luckily, in a later chapter, there is an arena where Rath can do a bit of catching up should Lyn's story be skipped all together and, if you get Linus' version of the map, there is an Orion's Bolt in a village near the arena for Rath to use at a later date. It will require dedicated investment to allow him to catch up, a matter made harder by his negligible performance during the enemy phase. He does benefit from being able to gain additional experience in Lyn's campaign, primarily by training against Eagler and Lundgren, though he will need to use a store-bought Steel Bow to harm the latter. As with any form of boss abuse, this will severely damage the player's turn count, but it will allow Serra and Nils to gain additional experience, and it will not affect the main campaign's tactics rating at all. Notably, Rath is one of the few characters who will usually be stronger if Lyn's Story is not played, since he joins at level 9 with B-rank bows, something he will have difficulty attaining in the tutorial.

Upon promotion, Rath will instantly gain a niche that other ranged units do not: access to swords. This is assisted by a respectable +3 gain to Defense upon promotion as well as his solid HP stat. His Strength will be no joke, and he will be able to double and kill most enemies in close combat with an Iron Sword. His Evasion allows him to dodge most attacks, but he is still in danger of getting overwhelmed by swarms of enemies. Lance users can threaten him, and will typically deal about 7-11 damage per hit if armed with weaponry such as the Steel Lance. Thankfully, Rath's high Movement allows him to retreat from virtually any situation he gets himself into, though the player should have an emergency healer with a Mend staff somewhere nearby just in case.

At max level, Rath tends to have middling Defense and Resistance, exceptional Speed and Strength, and fairly high Skill. His durability mostly comes from his HP, which is above average. His Luck is below average, so he might have to watch out for killer weapons. His Strength caps at a moderate amount, but all of his few support options will yield offensive gains, especially in Critical hit rate, which Rath can make use of, courtesy of his high Skill.

Rath also has the highest Aid in the entire game (Excluding Merlinus) meaning that he is the only character, once promoted, who can rescue promoted Oswin. Since Oswin is such a strong unit, but has low movement, being able to move him around quickly is another very good use for Rath. Dorcas promoted also can only be rescued by him. Unpromoted Priscilla, Kent, Sain, Florina, and Heath are capable of rescuing promoted Oswin and Dorcas, but not after promotion.

All in all, Rath is the best bow user in the game, and will be a good unit to deploy.

Wolf of Sacae
Son of the Kutolah tribe's chieftain, Dayan, the Silver Wolf. Lives as a proud Sacaen warrior. Appears in Fire Emblem: The Blazing Blade.

“For those whose reasoning is bent, I will straighten it with my bow”
—Rath, when selected for the final chapter.

Rath - The Sacaen Nomad
In the celebration following Lyn's return to Caelin, Rath slips out unseen. Whether he has returned to Sacae or has continued to work as a mercenary, no one knows.

Rath - Wolf of Sacae
Rath returned to his tribe in Sacae. His deeds earned him warm greetings from his father, the famed Silver Wolf.

Rath and Lyn
When her grandfather died, Lyn asked that Caelin be taken under Ostian protection. She set out for Sacae, where she was reunited with Rath of the Kutolah. They had a daughter and lived happily in the plains.

Rath is illustrated in the trading card game Fire Emblem Cipher with the following cards: 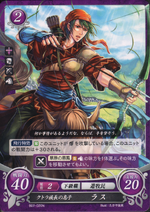 Rath is a Sanskrit word meaning chariot or wagon, which could be from the fact that he is mounted on a horse.