Bryce Papenbrook
[view]
“I'm human. I smile, I cry.”
—Raven in a support conversation with Rebecca.

Raven is a playable character in Fire Emblem: The Blazing Blade. He is a hard-eyed Mercenary. He harbors a deep grudge against house Ostia, which plays a role in his recruitment.

Previously known as Lord Raymond of Cornwell, a house destroyed by Ostia for corruption, Raven is the brother of Priscilla. He is recruited by Priscilla once she finds him serving as a prisoner turned mercenary on the enemy's side. Knowing that she is a member of Eliwood's army, Raven joins in hopes of getting closer to Hector (brother of Marquess Ostia) for revenge. He later gives up on his plans for vengeance (either due to Priscilla or Lucius' support conversations). He is accompanied by Lucius, his vassal and only friend.

It is unknown if Raven participated in the War on Bern or if he even lived to the day of the war.

Due to his past with Ostia, Raven becomes distant and anti-social, coldly reminding Priscilla that he is now Raven, not Lord Raymond. Raven seems to despise everyone at first, though it is possible for him to become quite close to Rebecca, Lucius and Wil through support conversations. In his conversations with Wil, he expresses dislike for Wil's new habit of referring to him as "Rave", "Senior" , and "Sir". In his conversations with Rebecca, he repairs her bowstring and she repays him by cooking him a meal. Raven's conversations with Lucius also lead to them growing very close, and he gains a more personable outlook on life, giving up on his revenge plot against Hector. He also converses with Bartre, who constantly challenges him to "duels of strength", which he finds bothersome and, more often than not, tries to avoid completely. Bartre also shows Raven his family tree after Raven teaches him writing. Raven tells Bartre to rewrite it, because he cannot read it.

Description: A troubled mercenary with a grudge against House Ostia.

He first appears in Chapter 16 or 17, depending on whether it is Eliwood's or Hector's mode. In Eliwood's mode, he will remain stagnant and it is vital to reach him with Priscilla before the Caelin soldiers escape and attack Raven, resulting in either his death or theirs. In Hector's mode, however, he fights alongside the remaining Laus soldiers, making him both easier (no need to rush to him with Priscilla) and harder (he could end up killing one of player's units, or be killed himself in counterattack) to recruit.

Raven has very high bases for his Level and join-time in addition to well-balanced offensive growth rates. He will almost always end up with very high HP, strength, skill, and speed, making him able to take out most enemies in one round. He also benefits from bonus stats in Hard mode since he starts out as an enemy. However, he also has low resistance and luck and mediocre constitution and Defense. Usually, this won't cause much trouble to him since mages are still quite rare when he joins and he has a large pool of HP, but later on, the constant risk of him getting critted as well as his terrible dodge against Sleep and Berserk might prove troublesome. His constitution is high enough to permit him to wield swords with impunity, but blades and axes will encumber him. A Body Ring can help him overcome his issues wielding lighter axes, though Raven is still generally fast enough to wield Iron Axes and Hand Axes without much trouble. However, with the generally low speed of most enemies in this game, Raven generally should not have too much trouble doubling even the fastest of enemies.

Raven's only significant weakness is his base class. He is initially locked to swords, which are the weakest choice of melee weapon; they have low Might, lack an easy 1-2 range option, and face weapon triangle disadvantage against many enemy types. This means that Raven can have some difficulty fighting mages or enemies with javelins or hand axes initially, and his damage may be lower than the player might like. Thankfully, Hero gives him low-rank axe use, plugging that hole in his arsenal once he has been trained. Raven is also never mounted, which means he loses out to other characters who can also one-round but possess those natural advantages (i.e. a trained Sain or Kent); once other characters sufficiently surpass the enemy, Raven's strong statline risks becoming overkill.

Since you receive a Hero Crest in the same chapter as you recruit him, it's not a bad idea to let him see some combat so he can promote early, making the chapters around and after the Dread Isle a lot easier and allowing you to train up his axe rank earlier. There are other units who could use the Hero Crest as well by then, like Guy, Bartre and Dorcas, but the latter two will probably have lower stats than him, especially in speed, while Guy stays sword-locked after promotion, making Raven the overall preferable choice for your first Hero Crest.

All in all, Raven is without a doubt one of your most powerful non-mounted units, joining early enough with very good base stats, decent growths and being capable of wielding 1-2 range weapons after promotion, while his rather low resistance and luck might hold him back in chapters like Genesis, Cog of Destiny and Sands of Time.

Peerless Fighter
A noble heir whose true name is Raymond. Works as a mercenary to enact revenge. Appears in Fire Emblem: The Blazing Blade.

Raven was mostly a solid offensive Axe Infantry unit introduced in Book I. Sadly, he lacked a lot of explosive impact due to being largely overshadowed by Hector. While time has not been particularly kind to Raven or most of his Book 1 units, Raven does have his merits offensively sporting a solid 34 Atk and 35 Spd. His mixed bulk is rather low however leading him to take massive damage if he is not careful. With the ease of access to acquiring multiple copies and investing in Dragonflowers, Raven actually can perform admirably and can provide a solid means of green physical offense, albeit leaving him as a glass cannon of sorts. He will require many premium skills to really keep up with the modern era of Heroes, but with the addition of his Resplendent form, it is much easier to achieve this.
Raven started off initially with a Brave Axe which was a solid offensive option, but he later received Basilikos which gives him special cooldown acceleration and, when refined, gains a Life and Death 3 effect, boosting his Atk/Spd by 5 while dropping his Def/Res by 5. While he becomes even more fragile, his increase to his offensive stats means that he can destroy some enemies before they even get the chance to counterattack.
Raven has Sol which keeps him well healed, as his powerful hits with Basilikos can heal a decent amount of damage when activated. Defiant Speed boosts his speed when he's low on health, but is not that useful on him as a whole both when he relied on Brave Axe and now with Basilikos. Threaten Defense on the other hand is an extremely useful Skill C skill and recommended for his final builds as it further reduces his enemy's defense, allowing his attacks to have more sting.

Raven is a character of extremes thanks to Basilikos' refinement. He is utterly obliterated by any Red unit, especially those that run Axebreaker, though in some circumstances, he can overcome this. Raven is also weak to Magic in particular with his low Res and Refine Basilikos's resistance lowering, making even most Green Mages like Gunnthrá and Nino dispatch him with ease. As an infantry, he is also weak to Poison Dagger units as well.

Reposition is generally a solid Support Skill to inherit, but Ardent Sacrifice also works well to help with Desperation builds. His high ATK makes him a great candidate for Dragon Fang, which boosts his ATK to the point that if he can activate it, he can actually combat and even dispose of his biggest Red unit threats. Galeforce is also worth running as his high Speed means that he can double often and has enough raw ATK that he can kill units in one round and can quickly charge this even faster with the help of a Heavy Blade seal which he can quickly charge due to his monstrous Atk stat.
If running a more standard build with Moonbow, Raven can actually run Life and Death on his weapon refine, Skill A, and Seal for essentially an enormous +15 to his Atk/Spd, meaning that including his weapon, his Atk reaches a massive value of 65 and has a neutral Spd of 50, far faster than most units in the game without assistance of similar skills or even higher merges. With further merges, Dragonflowers, and his resplendent, he can push these values to the absolute limit and can demolish foes in a matter of a single round. Wrath can be included to accelerate his special cooldown once he reaches a certain health threshold and Defense Smoke will impact more enemies with the Def drop, thus allowing him to further soften enemies before attacking.

“If I die here… so be it.”
—Final Chapter: Light quote
“...I'm done for. Is this really...the best I could aspire to?”
—Death Quote
“Yes... I was so distraught at the time... I believed the rumors without question. Without doubt. I truly did not care whether the lord of Ostia was guilty or not. I merely wanted to find a victim for the rage inside me... And you were right all along... I should have tried to understand...”
—Support Rank A with Lucius

Raven vanished without a word. Many reports have placed him in Araphen, but none could be confirmed.

Raven is illustrated in the trading card game Fire Emblem Cipher with the following cards: 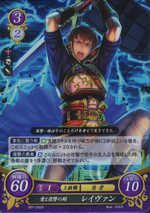 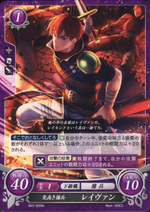 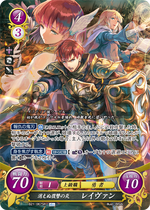 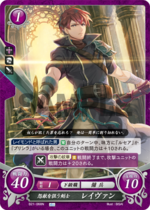 "Raven" may refer to the poem by Edgar Allen Poe, about a man mourning the death of a beloved woman and haunted by a raven. In Celtic folklore, ravens are either unlucky birds signaling death, or royal portents. The name "Raymond" comes from the Germanic elements "ragin" (advice) and "mund" (hand, protection). His family's old title Cornwell corrolates to Uther's name basis to Uther Pendragon and his conceiving of Arthur with Count Cornwell's wife (see Uther for a better understanding). This is only to some degree though.