Hunter Mackenzie Austin
[view]
“This is the way I prefer to remember it, milord. Please don't ruin it by correcting me!”
—Rebecca talking to Lowen in a support conversation

Rebecca is a playable archer in Fire Emblem: The Blazing Blade. She is the 15-year-old daughter of a village magistrate in Pherae and childhood friend of Wil. She is a sweet young girl in search of her long-lost brother.

In Rebecca's conversations with Sain, she expresses a thick skepticism and disdain for his supposed feelings for her. In the last conversation, she threatens to tell Lyn about herself and Sain, causing him to go silent and for her to call him a pig.

Rebecca is unseen 20 years later, though she was mentioned to be Roy's wet nurse.

Rebecca is a very flawed unit, and suffers many traditional issues of archer units. Her bases are rather poor, being too slow to double, too weak to deal much damage, and too frail to take more than one hit. Rebecca does possess decent growth rates and can double slower enemies relatively early, but she does not tend to one-round in Hard Mode for a while. Rebecca's utility is further reduced by the extreme power of the Hand Axe and Javelin in Blazing Blade. These weapons provide other, significantly sturdier units with ranged attacking options, but unlike Rebecca's bows, also enable melee-range countering. Most of the time, Rebecca can only counterattack fellow archers, which is an issue when many chapters contain large numbers of enemies that need to be cleared out quickly.

Rebecca also suffers from an issue in Blazing Blade that affects a number of weapons: the change from x3 effectiveness, as in most other games, to x2 effectiveness. This reduces Rebecca's niche even further, as while her weapons do deal increased damage to flier units, it is not enough, particularly in the early game, for her to take them down easily. Even in Normal Mode, she falls short of being able to one-shot enemy Pegasus Knights. As she gets stronger bows, this becomes less of an issue, but when combined with her mediocre-at-best Strength, she will take quite some time to counter fliers with any proficiency, and by that point, many other units can handle fliers as well.

Despite Rebecca's flaws, she can be pulled out of her doldrums with some work. Her growth rates are good enough in her important stats, and competition for bows in Blazing Blade is low enough that she can be safely handled higher-quality ones. Her support list is decent, including commonly-used units like Raven, Sain and Lowen, and even a few opportunities for support triangles. The Orion's Bolt item is in fairly low demand, and a Sniper promotion will usually give Rebecca a lot of help, due to its hefty +3 Strength boost and jumping up Rebecca's weapon rank, likely letting her one-round. Lastly, Rebecca has some of the best availability in the game and several chapters of free deployment, which means she has some time to help out. While she will still be hampered by the inherent limitations of a Sniper, she will at least be able to contribute, particularly in wyvern-heavy chapters like Unfulfilled Heart.

Wildflower
A girl who lives in a remote village and spends her time hunting. Kind and sociable. Appears in Fire Emblem: The Blazing Blade.

“I'll do whatever I can to help!”
—Final Chapter quote
“Um, Mark? Can I ask you something? Do you think Dart and I... have something in common? What? Not at all? Hmmm... I don't know there's something about him.”
—Chapter 19: The Dread Isle quote

Rebecca is illustrated in the trading card game Fire Emblem Cipher with the following cards: 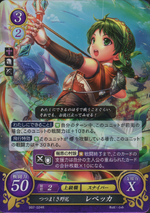 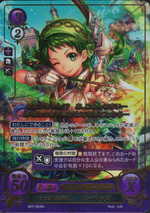 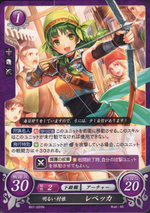