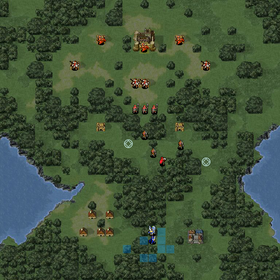 Catria (from start)
Warren (enemy, talk with Catria)
Cord (visit village with Marth, only seen in New Mystery of the Emblem)

Chapter script
[view]
“Leaving painful memories behind, Marth and his companions left Grust. They landed in Macedon; their new mission to rescue Princess Minerva. After the War of Shadows, Macedon was led by Minerva, who exiled the oppressive generals and attempted to reform the military. However, the influential General Rucke opposed Minerva’s peace-seeking ways. He assembled the exiled officers to instigate a coup d’etat. Caught unprepared, Minerva was captured by Rucke’s followers, and his rebel army seized control of Macedon. Then, they dispatched powerful dracoknights to guard the country’s forested borders.”
—Opening Narration, New Mystery of the Emblem
“Carrying regretful feelings, Marth leaves Grust and lands at Medon, to rescue Princess Minerva. After the War of Darkness, Medon was ruled by Minerva, who removed the generals, who had caused suffering for her people, and renovated the army. However, the powerful General Rucke opposed Minerva's actions. He gathered the removed soldiers to overthrow her in a coup. The unprepared Minerva was captured by Rucke's followers and Medon fell into the control of the rebels. They then dispatched powerful dragon knights to sternly guard the country's bordering forests.”
—Opening Narration, Mystery of the Emblem

Rebellion at Macedon is Chapter 2 of Fire Emblem: Mystery of the Emblem and its remake. 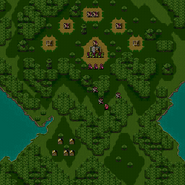