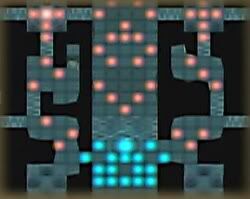 Chapter script
[view]
“Ike and company manage to evade their persistent foes, finally arriving in Sienne, the capital of Begnion. The Tower of Guidance. According to the Creed of the Goddess, which has been taught across the continent by Begnion, this is where the goddess Ashera will appear during times of great crisis to lead the people to safety. As even the smallest child in Begnion knows, the tower is sacred, and mere mortals may not enter. With the world edging toward catastrophe, the tower glows like a pillar of pure light, as though to pierce the very heavens.”
—Opening Narration

Rebirth (再生 Saisei) is the final chapter of Fire Emblem: Radiant Dawn, which is split into five parts. It takes place in the Tower of Guidance at the center of Begnion. In part 1, you take on the remainder of Begnion's holy army, led by Lekain.

The three groups reunite at the tower, only to be greeted by scores of enemies, many of whom they recognize as people they've already killed, at which point they realize that Ashera is bringing back dead soldiers to reuse. They decide to send a total of 17 units into the tower while the rest of the army holds off the infinite armies of revived warriors. At this point, Yune gives Micaiah more power, which manifests in the form of her promoting to third tier. Once inside, the first foe they run into is Vice-Minister Lekain, leading an army along with Senator Hetzel.

Your choices here are very important, as these characters have to last through five straight battles. Ike, Micaiah, Sothe, Sanaki, Ena, and Kurthnaga are all mandatory units. You will be prompted to choose ten additional units other than the herons, followed by one member of the heron tribe. Reyson is the recommended choice of heron due to his Canto ability and superior movement, although some prefer Rafiel because he can revitalize four units at once even in human form. Or if you want to reach an A level support with Leanne and Naesala you have to bring her. This should not be an issue, however, as you should have two Laguz Gems by this point, one of which can be given to Reyson to keep him in heron form indefinitely. Be sure to unassign skills from any units you don't plan to bring into the tower before Micaiah promotes to Light Priestess and you come to the unit selection screen, as once you are there you will not be able to access the Skills menu under Manage until the next chapter.

As mentioned previously, Micaiah promotes to Light Priestess as soon as you finish in the Base, so if she is not at level 20, giving her the necessary bonus experience to get there is top priority. Some players choose to bring Skrimir for this chapter, so getting him to level 30 so he can use a Satori Sign is also important if you decide to use him. Make Nihil a priority among assigning skills, and assign the Dragonfoe skill to one of your chosen units.

If Elincia, Lucia, Geoffrey, and Bastian are all alive, a conversation appears in which Duke Renning is recruited. Renning is a powerful Gold Knight with an SS-level in swords, making him a useful addition if you haven't raised a lot of units. If Volke was recruited and is still alive, a conversation appears in which he gives Ike 20,000 gold. There is also a conversation between Ike and King Caineghis in which the SS-ranked axe, Urvan, is acquired. This should not be missed, as Urvan has 22 might and 110 hit and grants its wielder a +3 bonus to resistance.

The shop has a number of Arms Scrolls, which can be used to quickly raise the weapon levels of any units to SS. As Micaiah will have only just promoted to third tier and will not be at SS in light magic yet, it is recommended that she is given one, and it is also prudent to raise your primary healer's weapon level in their offensive weapon to the highest it will go. Other useful items such as a Peshkatz and Verrine are also available, but the former is likely unnecessary if you recruited Volke (as he comes equipped with one which can be given to Sothe) and the latter can only be used by Pelleas and later Lehran.

Once inside the tower, your skills are limited to the ones you have on hand, and in the Convoy. Be sure to unequip all skills from unused characters before getting to the screen where you choose your 16 units. Of priority are the skills that can negate Ashera's Aurora: Nihil and Parity. Parity should be considered for Ike due to the fact that Ashera will not die unless he lands the final blow (and hits!), and since Ashera's space gives a natural +15 Evade, this could be difficult to do. Other skills should be considered: For example, if you decide to use Ilyana (despite many guides shrugging her off as the worst Mage in the game) for Chapter 4-E-3 and to kill Dheginsea, put Resolve on her so she can potentially double him after his attack. Other potentially useful skills are Daunt (until 4-E-4, because there is very little chance of Sephiran and zero chance for Ashera to miss), Dragonfoe (if you don't have a decent Thunder mage), Celerity (let those strong units get around!), Cancel (pair with Vantage), Vantage (pair with Cancel or Resolve), Gamble (iffy, but if you give it to a Trueblade like Mia, it'll throw her down to 70 hit, but give her 99 Crit.) Imbue (extremely useful if you use Elincia, or have BEXP abused and your physical fighter has capped Mag) Miracle (iffy, but can be extremely useful in the right circumstances. Pair with Resolve/Wrath) Pass (get past enemy lines. What's really funny about this skill is that you can walk right past Ashera while she still has her Auras up with it) Provoke (possibly, if you want to end battles quickly, give this to a powerful unit with a 1-2 weapon), Shade/Stillness (you should give this to someone who you need to keep alive,but it won't work on a Heron because it doesn't work for laguz, but you'll need extra skill capacity. Other candidates are Sanaki, if you haven't used her, Micaiah, if she's extremely weak at this point, or any unit you need to keep alive but is really weak), Savior (basically, same reasons as above if you need to keep a unit safe), and Wrath (pair with Vantage/Cancel).

Caineghis, Tibarn, Naesala, and Nailah are all highly recommended, as they have higher stats than most laguz and can stay transformed indefinitely. Giffca is nearly Caineghis's equal, though he needs to use the Laguz Gem that comes in his inventory to stay transformed for the entire battle. This leaves five spots for beorc units. Take along your strongest Marksman so that you can use the Double Bow (Equipped to A Marksman, he can attack/counter as though it were a crossbow or longbow as well as regular range) and either a Sentinel or Seraph Knight (or possibly a Marshall or Silver Knight) to wield the Wishblade. Ike can wield the Urvan if need be, so a top Reaver or Dragonlord is optional. At least two units besides Micaiah that can wield staves should be brought along. While they are unable to wield SS-level staves, Mist or Elincia is a recommended unit to use as you will be getting the Alondite in the next chapter. You also should bring Soren or Ilyana, depending on which one has been trained up to par. Soren is useful because he is likely to have a high support level with Ike and a special conversation triggers before the final stage on a second playthrough with save data from Fire Emblem: Path of Radiance if they had an A-level support in the save data and in this game, while Ilyana is the only unit in the game that can wield the most powerful thunder magic, Rexbolt, which will be useful against the enemies in the third stage. You can bring a Saint (either Rhys or Laura) along if you want to use the SS-ranked staves, but it is not that necessary, because Micaiah can use them after she promotes Third Tier.

The goal is to rout the enemy, and to that end, there is little to do but to charge right in. The enemies in this stage are comprised of magic-wielders and armored units except for two Snipers, so check to make sure you aren't sending any laguz to their dooms. It is recommended to have powerful units like Caineghis and Giffca advance up the sides of the stage, backed up by a beorc unit. Your Marksman should go towards the left, as the enemy that drops the Double Bow is located there. This stage has two bosses, Lekain and Hetzel. Hetzel cannot attack, but he has both a Sleep staff and a Silence staff. In addition, Lekain has a special attack where he silences all of your units at once. For this reason, it is recommended that you give all of your magic-wielders Restore staves, as equipping one clears away negative status effects at the end of the turn, and keep one of them near Sanaki, who can't wield staves, at all times. Ena is also useful here because of her Boon skill. Lekain wields the SS-ranked light magic, Rexaura, and also carries a Rewarp staff in order to escape if he's in danger. He will warp to a blocked-off area in the corner in the south end, at which he can not be engaged in melee and can only be engaged in ranged combat by one unit per turn (excluding Marksmen, who can attack from three squares away rather than two, flying units with ranged weapons, as they can just fly over the Misc. tiles, and magic-wielders with long-distance tomes). For this reason, it is recommended that you try to finish him during the same turn you first engage him. Hilariously, this will actually cause Lekain to be completely unable to retaliate, so you can preserve uses of the SS-rank Rexaura tome by killing him on the same turn he Rewarps. The SS-ranked Matrona staff waits in a chest beyond Lekain's initial position and unreachable until he is either killed or warps away. Since the chapter ends as soon as the last enemy is defeated, you should make sure to go after Lekain before attacking Hetzel if you want to claim the staff. Alternatively, just ignore Hetzel and wait for him to exhaust all his staves and use your own Restore staves to undo his work. He won't be able to attack once he's out of status staves and can be kept alive to prevent the chapter from ending so you can go claim the treasure and deal with other enemies.