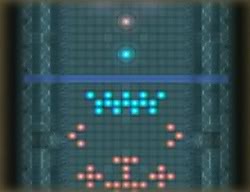 Rebirth is the final chapter of Fire Emblem: Radiant Dawn, which is split into five parts. It takes place in the Tower of Guidance at the center of Begnion. In part 2, you take on the Black Knight along with a small battalion led by Levail.

After defeating Lekain, Micaiah found the Blood Pact that had bound Daein in his possession, along with a second Blood Pact, which Naesala said was his responsibility and that Kilvas was the nation bound by that one. Both blood pacts were destroyed, freeing the two nations from Begnion oppression. A flashback scene plays, regarding Lekain and the corruption of the Begnion senate, but it is unclear as to whose eyes we are seeing from. The Chosen Ones continue to ascend the tower, where they are stopped by Zelgius, the Black Knight, who challenges Ike to a duel. He summons a magic barrier to prevent the rest of the army from interfering, and Levail leads a number of troops against them. After the Black Knight's defeat, another flashback scene plays, this time detailing Zelgius's past as a Branded and the origins of his armor. It is inferred that the person whose memories we are seeing has also lived for quite a long time without getting old, suggesting that they too are a Branded. Ike then says a prayer for Zelgius and claims Alondite.

The chapter ends when Zelgius is defeated, and Levail does not even need to be fought at all; however it is recommended that you do so as he drops the Wishblade when he is defeated. The enemies in this stage consist of  Halberdiers, Snipers, Warriors, Swordmasters, and Generals, and Levail as a Sentinel. It is recommended to fight Levail with a unit that can access Nihil to prevent the activation of Impale. Attacking him with long range magic like purge, blizzard, meteor, etc. can be used to weaken him. The terrain is very important in this stage. Ike starts out on a square that provides a large boost to defense, as does Zelgius. It is therefore recommended that you do not move Ike on the first turn, forcing Zelgius to come to you. Zelgius has Nihil and Imbue as well as the mastery skill Eclipse. Ike should have Nihil to prevent the activation of Eclipse. Ike will be unable to use Aether because of the opposing Nihil. Physic staves cannot reach Ike, so bringing an Elixir for whenever his health gets low is recommended. You should have plenty of time to get the Wishblade before Zelgius goes down. One easy method for taking down Zelgius is giving Ike a hammer to use against him, the hammer can destroy him in just a few hits, any weapon used by Ike can harm Zelgius.

Also, if Ike has an A-Support, it is possible to move Ike down, directly in front of the barrier, and his support partner directly on the opposite side. This will result in Ike being able to receive a support bonus, despite being separated from the rest of your army.