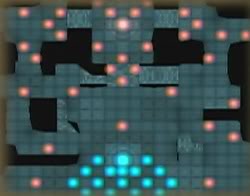 Rebirth is the final chapter of Fire Emblem: Radiant Dawn, which is split into five parts. It takes place in the Tower of Guidance at the center of Begnion. In part 3, you take on Dheginsea and the dragons of Goldoa.

As the Chosen Ones continue to climb up the tower, Yune tells them how things used to be. They come to a door, and Yune feels a great energy coming from behind it, and says that while she was hoping she would not have to do so until they got to Ashera, she had no choice but to bless their weapons now. She gives everyone her blessing, and they enter to find the entire population of Goldoa, led by King Dheginsea. Prince Kurthnaga tries to convince his father to reconsider his position, but to no avail, and the battle begins. After the battle, Dheginsea concedes leadership of Goldoa to his son, Kurthnaga, though it is unclear whether or not he dies, and another flashback from the same person as before shows King Dheginsea.

All of the laguz transform into their animal forms so that Yune can bless their weapons (which grants them infinite durability and the ability to harm Dheginsea, Sephiran, and Ashera). Ike automatically equips Ragnell to be blessed, while the other beorc units should equip their SS-level weapons. If any units have yet to reach SS-level, use Arms Scrolls now to get them up to that level. Sothe should have the Baselard, Micaiah should have Rexaura, your primary healer should have (depending on their class) either Valaura (if they're a Saint) or either the Alondite or Vague Katti (if it's Mist or Elincia; alternatively, Elincia can equip Amiti), and your remaining units should have the Double Bow, the Wishblade, Rexbolt, Rexcalibur, or possibly Urvan. Sanaki can equip Rexflame, but many prefer to have her use Cymbeline due to the might difference being negligible in exchange for Cymbeline's lower weight, a large enough difference that she will likely have worse evasion with Rexflame in spite of the +3 Spd bonus it imparts. The Dragonfoe skill is extremely useful here, as the enemies are all dragons, so make sure one of your units equips it.

Start by having Reyson use a Laguz Gem, as the other laguz will already be in animal form. White dragons have high resistance but average defense, so let the laguz royals and the unit you gave Dragonfoe to rip them apart. Red dragons will fall easily to magic-wielders with Thunder (magic)|Thunder magic, although Sanaki shouldn't try to take on an enemy that hasn't been weakened first as she gets weighed down easily by heavy tomes like Thoron and Arcthunder and is unlikely to be able to dodge or withstand a counterattack. Another trick to easily take out even Red Dragons in one hit is to equip Dragonfoe on a unit wielding Crossbows. Beyond this point there really isn't any good reason to use them, but here the otherwise outclassed Taksh, Aqqar and Arbalest are monstrously strong in the hands of a Dragonfoe unit. Their 1-2 range lets any durable or well-healed unit take on multiple dragons on enemy phase and wipe them all out on counterattack.

None of the enemies will attack or counterattack Ena or Kurthnaga, so you can use them to block off the left-hand corridor and narrow the right-hand side to one square, which Caineghis or Giffca should hold. To finish the level without killing either Gareth or Nasir, you will likely need to attack Dheginsea many times in a single turn despite the inability to attack him from all four sides. Units with Canto such as Tibarn and Naesala are recommended to attack first and retreat to a knight's move away from Dheginsea, then have Caineghis and Ike move in to engage him in melee. Tibarn, Ike and Caineghis should all have Nihil to cancel out Dheginsea's Ire. Use Reyson to give these four another move, then have them attack again. If Dheginsea still stands, it is recommended that you next attack with your Marksman, as he can attack with the Double Bow from three squares away, out of the range of a counterattack. While his own Nihil cancels out mastery skills and bonus damage from Dragonfoe, Dheginsea still takes bonus damage from thunder magic and wyrmslayers, so if you brought Ilyana along or blessed a wyrmslayer, they can potentially administer a fatal blow almost regardless of his HP with a bit of luck, and should definitely be able to finish him off after all of those other attacks.

If the player is not concerned about game time or turn count, an alternate strategy is to deploy only the mandatory units and keep everyone except Kurthnaga and Ena out of enemy range at all times or give them Savior and rescue Ike and Micaiah. Meaning only these two will actually fight in this chapter. One important detail about this chapter is that all enemies here are scripted to never attack or even counterattack Ena and Kurthnaga, and this quirk applies to the boss, Dheginsea, himself. This allows the duo to kill all the enemies by themselves without any risks, although Ena will probably won't do any damage to Dheginsea due to her low strength, she will still be useful because of blood tide but it would a while just turns to kill him, assuming blood tide is active and Kurthnaga has SS strike and has capped strength and Dheginsea does not dodge him, although Ike can help. If they both have paragon and blossom, it is the best chance to level them up. it is possible to get them both to level 40 by the end of the mission, although this will take a while due to the low starting level and base stats of the pair, you can give Kurthnaga dragonslayer You can also use a blessed wyrmslayer(Mist or Elincia and have them use Alondite) for Ike, and have Micaiah heal him with a physic every time he gets to low health, which make the procedure much quicker.

If one would like to complete this map in 1 turn, it is recommended to have Giffca and Cahnegis fully capped in Strength. If this happens, on Normal or Hard Mode, they will inflict 40 damage each, which alongside any unit(s) who can inflict a total of 20 damage to Dheginsea, will KO him (On Easy mode, Giffca and Cahnegis can KO Dheginsea themselves, due to the +5 to all stats, as both double attack). Ensure that Rafiel is positioned in a way in which he can dance for all 4 selected units, and someone is able to dispatch the Red Dragon blocking the path to Dheginsea. Any 11 movement unit, such as a Jill with Boots, is capable of reaching this Red Dragon without Rafiel's aid. Otherwise, Rafiel's aid is required and the last danced unit MUST be able to inflict 20 or more damage to Dheginsea. To ensure reliability, it is recommended to give Parity or Nihil to all units fighting Dheginsea to prevent unexpected Ire activations, and therefore, deaths. If all attacks are able to connect and all units do not die from Dheginsea's counter attacks, Dheginsea will fall in 1 turn.