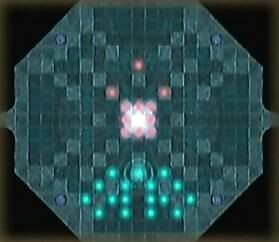 Rebirth 5 is the final part of the ultimate (5-part) chapter in Fire Emblem: Radiant Dawn. In this chapter the group selected by the player face off against Ashera, Goddess of Order and the final boss of the game. Ashera wields the weapon Judge, an extremely powerful weapon capable of killing any second-tier characters easily. Ashera is also surrounded by an Aura, a shield that cannot attack, but does wield the skill Aurora which deals half of the damage it receives from a character. Additionally, the Aura will heal itself by 40 HP at the end of every turn. Spirits also appear around the map to deal additional damage or heal shields. Ashera will occasionally attack, in a similar way that Sephiran, Dheginsea, and Lekain attacked in the previous chapters, capable of dealing significant damage. If Ashera is killed by anyone but Ike, she will revive and recover her full amount of hit points (in easy mode only 10HP). The final blow must be delivered by Ike while equipped with the sword Ragnell.

The first step is the most obvious; go for the auroras. Start slow. Use a bunch of units to attack the auroras in the corners. Also, try to use units with Nihil, as this counters Aurora's power to reflect half the damage done to them back onto the attacker. It is useful to note that Aurora will not activate against fatal blows, even if the attacking unit does not have Nihil.

Another useful tip is to use your heron's Vigor ability to the fullest potential. Try to use Tibarn to attack an aurora in the middle of 3. Use his canto ability to move so that there is 2 spaces between him and the aurora. Then attack with Cainenghis, whereupon the aurora should be defeated, and there should be one space between Cainenghis and Tibarn. Since you want your heron to revitalize the most people at once, move Micaiah and Mist so that they, with your two Laguz kings, create 4 targets for your heron to revitalize, after they use their phsycic staves to heal the two kings. Then move the heron in, use vigor, and repeat and attack a different aurora, and heal them again. With your other units pitching in, you should kill 3-4 aurora's per turn.

Every couple of turns, Ashera will use a magical based attack similar to Dheginsea's when you fought him, except it hits everyone no matter where they are. Healing is the most important part of this chapter, so keep on it. NEVER let anyone be close to dying, and her attack WILL kill anyone in the second tier very easily. Sometimes certain units can escape getting hit (they receive No Damage), but this is not to be counted on. The amount of damage received is based on the distance from the goddess, while she can perform a magical or physical attack (yellow or blue, respectively). The turns she does not use this attack, she can either do a similar action, that could change the state of several units at a time, or focus her power in only one unit (Shinon's Provoke could be very useful).

Once the auroras are defeated, attack Ashera with everything you have. Try using Haar equipped with Urvan, canto him back, then Tibarn, canto him back and then Cainenghis, MAKE SURE you do not defeat Ashera with anyone but Ike equipped with Ragnell. If Ashera has enough HP left to take 2 hits from Ike, then revitalize your laguz, or just attack and use your heron to make Ike attack again. After that, enjoy the endgame.

Ashera won't harm Micaiah with all "Single" variations of Judge, as she stated before the battle that neither Yune nor her can overthrow each other. This isn't very useful, however, as she only needs 2 or 3 physical hits to kill Micaiah if she is close to her, while Micaiah can't deal high damage to Ashera even with Rexaura. Somewhat similarly, if Lehran attacks Ashera she will not counterattack.