Macellan
Astram (Enemy, talk with Jeorge (he must have survived Chapters 7, 8 and 9))

Chapter script
[view]
“It was a fierce battle like no other. However, Altea had been liberated. “Yes, our homeland has been liberated. Only the castle remains… If we regain Altea Castle, where I was born and raised… Thank you my friends… Thank you for believing in me…” Tears shimmered down Marth’s face. And the girl who gently wiped away his tears couldn’t stop her own…”
—Opening Narration, Shin Monsho
“This was a fierce battle like no other. But, their homeland of Aritia has been liberated. All that remains is the castle... "If I could regain Aritia castle, where I was born... Everybody, thank you... I really must thank you all for placing your trust in me..." Before Marth's face flowed shimmering tears... Even the girl, who gently wiped his tears away, couldn't prevent her own tears...”
—Opening Narration, Mystery of the Emblem

Reclaim the Capital is Chapter 16 of Fire Emblem: Mystery of the Emblem and its remake.

This chapter contains a "treasury" room with 7 chests arranged like so:

The contents are as follows:

If any of the chests are opened, either by the player or by enemy thieves, the room containing the Boss and a large number of enemies will open as well as initiating the spawn of several high level enemy reinforcements near the player starting point. 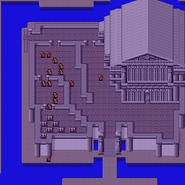