Recover is a staff that debuted in Fire Emblem: Shadow Dragon and the Blade of Light.

It is the most potent healing Staff available in the Fire Emblem Series, only surpassed by the Saint's Staff, the Latona and the Goddess Staff.

When cast, this staff will completely replenish the HP of a selected ally unit, regardless of how high the user's Magic stat is. Such a powerful effect is offset by the limited number of uses this staff possesses, and it should thus be used sparingly.

The Recover Staff is usually obtainable near the resolution of the games it appears in, where it is sold at exorbitant prices by vendors.

“Restores all HP to allies in adjacent spaces.”
—In-game description, The Sacred Stones

In Thracia 776, the Recover Staff is not purchasable in both normal and Secret shops alike. This staff may only be obtained by stealing it from an enemy Dancer in Chapter 18, either by means of utilizing Tina's Thief Staff, a competent Thief unit, or capturing her.

The Recover Staff, as it appears in the first series of the TCG.

Ced casting Recover on Febail in Genealogy of the Holy War.

An enemy Bishop casting Recover on a fellow enemy Sniper in The Binding Blade.

Ewan casting Recover on Knoll in The Sacred Stones. 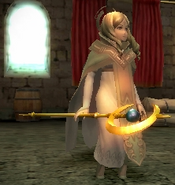 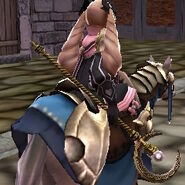