The Red Dragon ( Reddo doragon) is both a race and a class of Dragon tribe Laguz that is exclusive to the Tellius Series of Fire Emblem. Like their name suggests, Red Dragons form a group of Laguz that is able to assume the form of a dragon sporting crimson-colored scales at will. Breathing fumes of Red Breath in order to fend off their enemies, Red Dragons are, like all other dragon-based classes, vulnerable to dragon-slaying weapons and Thunder Magic.

Alongside the White Dragons and Black Dragons, Red Dragons inhabit the nation of Goldoa. Under the leadership of Dheginsea, the entire country was isolated from the rest of Tellius, and its inhabitants rarely, if at all, encountered anyone hailing from foreign countries. This is primarily attributed to a pact that Dheginsea made with the goddess Ashera herself to prevent the outbreak of war; all too familiar with his people's potential to devastate with little effort and their inability to restrain themselves when their instinct for fighting is triggered, he thus executed such a drastic measure in order to prevent any possibility of them either initiating or fueling conflicts on the continent.

The Dragon tribe Laguz observe a social hierarchy that ranks the different divisions based on their might; the Red Dragons are considered to be the weakest division, followed by the White Dragons and finally the Black Dragons. Much like how the society of Gallia functions, leadership is granted to the division that is recognized as the strongest. As the Black Dragons are indisputably regarded to possess unparalleled might, leadership of the country is therefore conferred to them, with a small group making up its royal family.

The only named members of the Red Dragons to appear in the games are Ena and Gareth. While Ena is referred to as a Red Dragon in both titles she appears in, she is not purely a Red Dragon, and is instead a hybrid cross between a Red Dragon and a White Dragon. The color of her scales reflects the fact, taking on a hue of pink that is achieved through the melding of red and white. Alongside the fact that she herself is the mate of a Black Dragon, the existence of Ena is testament to the fact that the members of the Dragon tribe Laguz are permitted to cross-mate, unrestricted by the color of their scales.

Following the defeat of Dheginsea in the Tower of Guidance during the events of Radiant Dawn, Goldoa's monarchy is inherited by his second son Kurthnaga, who makes the radical decision to open the doors of the country to the world for the first time in eons.

Red Dragons excel in high HP, Strength and Defense, strengths that are offset by their low Speed and Resistance. In this regard, while Red Dragons are superb at withstanding physical onslaughts and defeating foes with low Defense with ease, they are weak against attacks launched by magic wielders. Their weakness is particularly pronounced when they engage wielders of Thunder Magic with high Speed in combat, as these foes will be able to fell them with little effort.

Although Ena is technically classified as a Red Dragon, in Radiant Dawn, it can be observed that her stats are more oriented towards those of a White Dragon, where she excels in Magic and Resistance as opposed to Strength and Defense. However, as the Red Breath that she breathes inflicts physical damage instead of magical damage, her potential as a unit is thus severely hampered, with her attacks remaining consistently weak as opposed to those inflicted by a pureblood Red Dragon like Gareth. She can still be effectively used as a means to dispatch magic-based units with poor Defense.

Path of Radiance and Radiant Dawn 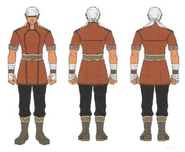 Concept artwork of the Red Dragon class in human form from Radiant Dawn. 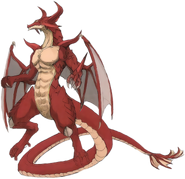 Battle model of Ena as an untransformed Red Dragon in Path of Radiance.

Battle model of Ena as a transformed Red Dragon in Path of Radiance.

Battle model of Ena as an untransformed Red Dragon in Radiant Dawn.

Battle model of Ena as a transformed Red Dragon in Radiant Dawn.

Battle model of Gareth as an untransformed Red Dragon in Radiant Dawn. 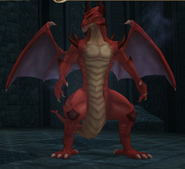 Battle model of Gareth as a transformed Red Dragon in Radiant Dawn.

Battle model of an untransformed Red Dragon from Radiant Dawn. 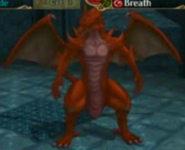