For the character from New Mystery of the Emblem, see Katarina.

Reese (リース Rīsu) is the protagonist of TearRing Saga: Berwick Saga. He is the young prince of Chinon and the son of king Bernstol. He was raised alongside Lanette.

Join automatically from the start of Chapter 1 - Reason to Fight.

Reese is the lord character of the game and starts subpar, but grows immensely powerful. Unusually for lords, Reese has the highest HP and Defence growths in the game (tying with a few characters for the former and Daoud for the latter), and respectable growths in Strength and Agility. Reese's personal items are very strong (Pell Shield is the third best small shield in the game; ☆Lord Gram is pretty much a Brave Sword with +18 Crit and same effect as a Amulet, while ☆Succeed has the second highest Mt of all swords combined with +15 Holy damage) and his Commander skill allows Reese to act as a so called "Charisma bot", boosting allies accuracy, even if he himself can't do anything. Reese's main drawback lies in his inability to participate in side missions.

Wallpaper of Reese and Lanette.

An unused beta portrait of Reese.

An unused portrait of Reese with blue hair.

Another unused beta portrait of Reese. 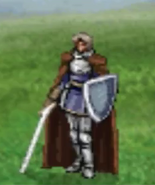