Chapter 11: To The Sea (Fates: Birthright)

Stephanie Lemelin
[view]
“But this type of battle is like a playground to me. Oh, I wish you could have seen some of the work I did on the way here. The depth of agony was palpable. And the palette of violent reds...so vivid. Mmm...”
—Reina upon being recruited by Corrin in Chapter 11 (Birthright)

Reina is a playable character in Fire Emblem Fates on the Birthright and Revelation routes. A Hoshidan Kinshi Knight who once served the late Queen Mikoto, Reina enjoys the thrill of battle, possessing an unnerving obsession with death.

The daughter of a prominent feudal lord in Hoshido, Reina was originally raised to become a lady befitting of her family's social position. This contrasts very starkly with her childhood fascination with the Hoshidan army's training, one that eventually developed into a desire to join the guard. Before departing from her home, Reina's parents gave her an apron in the hopes that it would sway her into consigning to their expectations for her to take up the role of a domestic woman. She elected to go against her parents' wishes, choosing instead to mould herself into a knight. Quickly rising through the military ranks, Reina's efforts were eventually recognized by Mikoto, who promoted her into one of her personal retainers. While she personally saw this as a tremendous honour, Reina's parents thought otherwise and thereafter chose to sever their ties with her. Although hurt by her parents' actions, Reina continued to execute her duties as a knight unfalteringly while retaining the apron given to her as a sign of gratitude to them.

Reina first appears in Chapter 11, where she, under the behest of Yukimura, seeks to join Corrin's army while they are en route to Nohr by sea. Spotting the army stranded on board a ship besieged by a number of invisible enemies, Reina immediately swoops in to provide aid to them, excitedly announcing her anticipation to rain death on her foes.

Reina subsequently aids the Corrin's effort to put an end to the age-old conflict shared between Hoshido and Nohr.

Reina appears in Chapter 13, where she, alongside Takumi, Orochi and Scarlet, leads a rebellion uprising that has broken out in Cheve. The rebels clash with Corrin's army when the latter is deployed by Garon to eliminate them. Despite the best effort of the rebels, they are eventually defeated in the ensuing battle. Although Reina's fate thereafter is not explicitly mentioned, it is very likely that she is executed by Hans off-screen, along with a majority of her allies, or her fate had already been determined during her fall in battle before the events.

Reina appears in Chapter 11, where she accompanies Saizo and Orochi on a mission to rescue Kagero, who had been captured by the Ninja of Mokushu. While in the midst of their search for Kagero, the band stumble upon the Corrin's army, who have entered the forest to locate Saizo. Saizo chooses to believe in Corrin's goodwill at this point and decides to aid their cause with Reina and Orochi silently following suit.

Reina is primarily depicted as a bloodthirsty individual who relishes the chaos of warfare, harbouring a morbid fascination with hearing the screams and cries of agony emitted by her foes. This fact is exemplified in Chapter 11 of Revelation, where she remarks that the placement of the trees forms the perfect acoustics that allow her to better enjoy the last words uttered by her foes.

Through her supports with Corrin, a completely different side to Reina's personality is revealed, one that starkly acts as a foil to the sadistic demeanour that she adopts on the battlefield. Away from the battlefield, Reina adopts a motherly demeanour as she dotingly cares for her allies to provide them comfort from the chaos of warfare.

Reina is said to be the best listener in the army.

Reina is a pre-promoted unit that joins in both Birthright and Revelation around the time that most units already in the army likely have not already promoted. She has solid base stats upon recruitment, making her viable for immediate use. She excels at dealing damage thanks to her strong Strength and Speed growths and moderate HP growths. She is offset by her low defense growths and low skill, which makes her very fragile, especially against Archer and Outlaw units since they have Bows/Yumis which deals effective damage to her and high skill to tag her, leading to devastating damage. Another unfortunate aspect of Reina is her inability to support anyone other than Corrin and Kana if she is her daughter. This prevents her from gaining good bonuses to her Attack Stance and Guard Stance unless sticking close to the Corrin. Reina works best as a target killer as her personal skill, Morbid Celebration, regenerates her health by 20% when she initiates combat and kills the enemy. This syncs well with most Blow related skills and syncs especially well with the Dark Pegasus' Galeforce skill so long as the player has access to the class as not only can she kill an enemy, she will rejuvenate her health and receive a free turn to either eliminate another enemy or retreat to safety.

Reina starts off with her Sky Knight starting skills Darting Blow which further increases her speed when initiating combat and Camaraderie to regenerate her own health while near allies. She can further train in her Kinshi Knight base to learn Air Superiority at level 5, giving her dominion over the sky by gaining more hit and avoid when facing other aerial units, making her a deadlier anti-air unit. At Level 15, she learns Amaterasu to heal nearby allies every turn. She can slide into the Falcon Knight class to obtain Rally Speed to boost allies in case she cannot reach the enemy herself and Warding Blow, neutralizing a decent amount of damage of mages, synching well with her ability to use lances as it have a weapon advantage over Tomes and Scrolls

Reina's secondary class is the Diviner class, an odd choice that does not sync very well with her base stats and growths as she favors strength. Still, she has some viable usage from this class. Future Sight increases her EXP gains, which is good for training. Onmyoji's only beneficial skill would be Rally Magic as it gives her more supportive skills and Tomefaire lacks usage in her base class. Basara on the other hand teaches her Rend Heaven, adding additional damage to her attacks by utilizing her opponent's stats. It has a high activation rate so it is worth learning just for the opportunity to deal more damage. Quixotic carries a bit of a gamble as it enhances both her own Hit Rate and her opponents' by 30. While the latter is mostly only an issue for PvP battles, the best way to utilize this skill is to exploit weapon ranges to ensure that she can reap the benefits fully without having to deal with a counterattack.

Reina's Tertairy class is the Ninja class, which does compliment her base growths and stats, making her viable as one. Locktouch is strictly utility and should only be present in her skill list either if there are no other skills available or their is a need for multiple lock pickers. Poison Strike however has great usage for her as if she fails to kill an enemy, especially when exploiting weapon ranges, she can further weaken an enemy to a killable level. Master Ninja's skills are subjective for use as Lethality, while great for its instant kill effect, has a low activation rate, making it more for clutch moments rather than reliable damage output. Shurikenfaire is solely if she stays in this class or her other promotion option from this class. Mechanist maintains her usage of her Bow/Yumi Weapon Mastery already established. Golembane is more for PvP battles or for opposing fellow Mechanists. Replicate has a lot of usage for combat as she can be present at different points of the map and can use her Personal skill twice per turn as long as she kills an enemy. It does, however, carry the risk of having to manage both versions of herself at the same time, meaning that if one is killed, the other one dies too.

With Corrin as her only means of obtaining additional skills, there are a wide variety of skills that she can possibly take to assist her. Classes with Blow related skills will compliment her well, especially Death Blow to increase critical hit chances to ensure a kill and Armored Blow to boost her defenses. The Archer class and Spear Fighter classes also benefit her with their respective weaponfaire skills. Dark Mage will provide the Sorcerer class which provides Vengeance, a useful attack skill, and Bowbreaker, alleviating the risk of being attacked by Bow/Yumi wielding enemies.

Reina is illustrated in the trading card game Fire Emblem Cipher with the following cards: 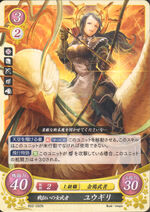 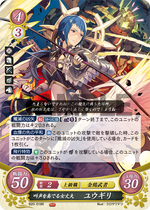 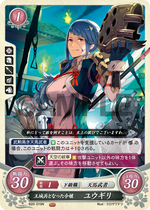 Yuugiri (夕霧) can mean "evening mist". It is also the name of a Japanese destroyer.