Christopher Corey Smith
[view]
“I see... So you really are serious about this... It's exactly as Bishop Saias said. You have indeed grown up—that's clear to me now. You've become a formidable woman, Olwen. I'm proud of you. This is the last time I'll be able to treat you as my little sister, and not as my enemy.”
—Reinhardt to Olwen, when they meet on the battlefield

Reinhardt is an enemy character from Fire Emblem: Thracia 776. Said to be the second coming of the Crusader Thrud, he is the leader of the Gelben Ritter in the Friege army and has been Ishtar's personal guardian since childhood. He is also the older brother of Olwen, who initially admires him. Kempf despises him out of envy and views him as a rival.

A paragon of professionalism and honor among Friege's knights, Reinhardt is an honorable leader who understands the horrors of war. He is a seemingly confident, stoic man who holds respect for those whom he comes across in war, be they friend or foe; however, this honor and confidence is a facade that masks the doubt he has in the path he has chosen, a facade that he might have taken on as to not impact his fellow knights' morale. He holds immense respect and love for his sister Olwen, with his own doubt only serving to improve his impression of her despite her siding with the enemy, with him observing that she has chosen the path of good.

In spite of his common sense, Reinhardt, similarly to Camus, loves his motherland to the point where he will disregard what he may believe is the right path, in favor of continuing to serve his friend Ishtar, and his motherland of Friege, until his dying breath. He even regrets fighting against Leif's army, requesting forgiveness when he enters combat against them.

He holds immense respect for Ishtar (out of appreciation for her skill with thunder magic) as well as Saias (for his tactical prowess), and it is revealed that he has seen the former as more than a friend. It is never known how he feels about Julius beyond the typical jealousy, due to his code of honor preventing him from objecting Julius's order to separate him from Ishtar.

In terms of one-on-one combat, Reinhardt is probably the strongest boss in the game. He has four powerful skills, a Dire Thunder tome, a Meisterschwert, five leadership stars, five movement stars, a PC of 2 (an utter rarity among bosses), and high stats to boot. If you have been using Olwen with the Vantage + Dire Thunder combo, Reinhardt has that too, but he is stronger than her thanks to his skills.

Thunder's Fist
Formidable and admired mage knight in Friege's army. Ever ready to lend an ear to his younger sister, Olwen. Appears in Fire Emblem: Thracia 776.

Reinhardt has one of the most infamous reputations in Heroes as a widely used and powerful player turn character. While his Spd may not cry out offensive powerhouse, has Atk is strong enough to make full usage of his personal tome that is the cornerstone to his presence in the Heroes meta. Despite its evolution and many new character receiving fancier weapons, he has maintained a comfortable spot as one of the most powerful and easily accessible Blue Tome units and is especially powerful thanks to his status as a cavalier unit as well. It also does not help that his easy access makes him an excellent budget unit to make.

While he shares Dire Thunder with his sister for a personal weapon, Reinhardt's higher Atk makes his attacks more powerful than Olwen, but he does trade this off for not being able to potentially quad attack with the tome. Given their respective Spd, it is unlikely that Olwen can quad attack her opponent to grant her a higher damage output, thus many prefer Reinhardt as a result since not only is he more accessible, but also his Spd is so low that the Spd penalty Dire Thunder inflicts, -5 Spd, hardly changes up his match ups. In his case, Reinhardt can deal two consecutive 41 neutral Atk in magic damage to his opponents, thus bringing it to a base 82 damage not factoring skills. Very few units in the beginning could survive this and many Red, Colorless, and even Blue units do not like being at the receiving end of this attack.

Reinhardt comes with Blazing Thunder, a moderately powerful AOE special attack, but overall would rather have raw attack boosts to obliterate his enemies. He runs Vantage, which has its uses, but unfortunately Dire Thunder does not keep its effects in the enemy turn, thus he can use it only to finish off a target he failed to deal with and is weak enough to use it. Finally he has Goad Cavalry, a great supportive option if placing him on a Horse team. Due to his ease of access since he can be pulled at 3 and 4-Star while his sister is a 5-Star exclusive, Reinhardt is a fairly common unit found in Arenas and is a top tier character as a result.

Reinhardt is much more easily dispatched on the enemy turn by most direct fighters since he cannot counter attack him. His low speed mean that a majority of characters can double him if they either survive his onslaught or get to him first and his average Def and Res means that many hyper offensive characters and strong characters can double him. Defensive turn green units like Fae, Deirdre, and Winter Lissa easily take care of him, even when he tries to take advantage of his strengths. High resistance units also can weather his attacks and retaliate strongly. Felicia is a good example of a hard Reinhardt counter in this regard. Finally, as a Cavalry, most units with Cavalry slaying weapons like Female Robin, Micaiah, and Ursula. Brave Micaiah is his strongest counter as she has the unit effectiveness plus color advantage.

First and foremost Death Blow is an absolute must for Dire Thunder Reinhardt to maximize his player turn damage. A +Atk IV Reinhardt with Death Blow can reach a base attack of 50 that has the brave Effect, leaving few units who can survive that much raw damage. Luna is an overall better attacking skill for Reinhardt as his attacks quickly charge it, letting him dispatch foes quicker. However, Moonbow can be used especially in conjunction with Quickened Pulse for his seal to allow his first round of combat to activate it. Lancebreaker is a solid Skill B to expand his target options, though he needs to be mindful of Berkut's Lance wielding enemies. If willing to sacrifice a Spring Catria for Chill Resistance to weaken certain targets, though its preference of targeting the unit with the highest Res may lead to awkward situations where it is debuffing the one character that will kill him even with it. Hone Cavalry can substitute Goad Cavalry to assist cavalry allies with its stat increase without them needing to stick to him. Finally, Reposition is his best support skill for unit placement manipulation.

“This must be fate... Forgive me...”
—Reinhardt's battle quote

Reinhardt is illustrated in the trading card game with the following cards: 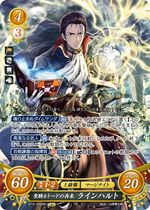 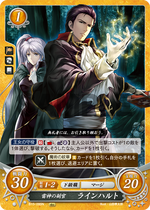