Bishop
[view]
“I went astray. I listened to your honeyed words... I dreamt of the impossible... the return of a lost soul. But...what you gave me was... a puppet... It was soulless...nothing more than an empty vessel!!”
—Renault raging at Nergal in the final battle.

Renault (Renaud in the PAL region versions) is a playable character in Fire Emblem: The Blazing Blade. He is a Bishop of the St. Elimine clergy seeking to atone for his past sins on Valor. Although first seen during the chapter, Imprisoner of Magic, at the southern ruins where gives the party a Goddess Icon, he may be recruited in Victory or Death (Chapter E30, H32) at the northwestern ruins.

Even after learning his history through several support conversations, Renault's mysterious past is difficult to decipher.

Through his various Support Conversations, it is understood that Renault was once a mercenary, and eventually lost his best friend during a battle. Driven mad from grief, he became filled with greed and bloodlust, killing many that opposed him. A victim in particular was Lucius's father, who Renault killed in front of a young Lucius and his mother. (During the Lucius/Renault A support conversation, Lucius forgives Renault for killing his father.)

Eventually he associated himself with the Dark Druid, Nergal. Later learning of Nergal's intentions of raising morphs, Renault aided him faithfully in the hope that his deceased friend could be brought back to life, and in the process, it made him "less than human". Nergal had fulfilled his promise, but when Renault saw what was done to his friend's body, he realized the error of Nergal's ways and the atrocities committed as a result, leading to abandon him. Wishing to atone for his sins, he joined the St. Elimine clergy, becoming one of its most powerful, yet mysterious Bishops.

Eventually, he sought sanctum on the Dread Isle, wishing to atone for his sins from his past. When Eliwood, Hector, and their companions find Renault, he joins them and lends his strength for the sake of returning peace to the world.

Shortly after the final battle, he disappeared, leaving questions of his past in his wake. His fate is unknown.

Renault's personality dramatically changed throughout his long lifetime. What can truly be confirmed is his current one, where he is greatly enigmatic, and introverted, choosing to reveal his past to a select few. He is not an emotionless shell, as what is first perceived, as he does confess about his past with deep regret and lash out in anger whilst confronting Nergal.

Renault is a late-joining staff user. While his stats are odd for a Bishop (his high Skill and Speed but poor Magic likely due to his past as a mercenary), he possesses an A-rank in both Staves and Light magic, and he can easily use high level staves such as Physic, or his Fortify staff. While his magic is quite low, he is durable, and can still wield staves like Recover to heal the needed amount or Hammerne for last-minute weapon or staff patch-ups.

While Renault is a good staff user, he is utterly bad in battle. His Magic stat of 12 limits his combat potential, specially against magic users. It can go up to 16 with level ups or 18 if the player uses an Energy Ring on him.

His Light magic rank can be raised to S, so Renault is able to use Aureola; however, this requires a lot of effort, since he joins very late and his low Magic stat does not make up for it.

Renault: ...Nergal, do you remember me?

Nergal: Hah. You are... Renault. So you're still seeking out a wretched existence?

Renault: I went astray. I listened to your honeyed words... I dreamt of the impossible... the return of a lost soul. But...what you gave me was... a puppet... It was soulless...nothing more than an empty vessel!!

Nergal: Just an empty vessel... Isn't that what you wanted? You desired to bring back your dead friend. You were my experiment, and I completed my morph. I'm grateful, Renault. Thanks to you, I gained power.

Renault: You villain... You cursed him! Your crime can never be forgiven! I will end you with my hands. In the name of my lost friend!

“It is for this moment that I have lived...”
—Final Chapter quote

No one knew the old him. No one knew what became of him. He vanished as though he never existed.

Renault simply vanished after the battle. Isadora, now alone, returned to Pherae, as a member of the imperial guard. Years later, she entered the service of Elimine, hoping to find answers in the clergy.

Renault is illustrated in the trading card game Fire Emblem Cipher with the following cards: 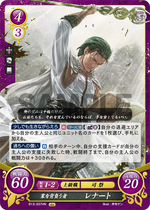 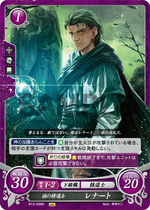 Renault is named after the legendary knight Renaud (or Renault) de Montauban, said to have been a contemporary to Charlemagne and the Twelve Paladins in French epic poetry. He is occasionally named as a cousin of the paladin Roland, and he is described as owning the magical horse Bayard.

Renault as a Bishop in Fire Emblem 0 (Cipher).

Renault as a Monk in Fire Emblem 0 (Cipher).

Renault's portrait in The Blazing Blade.