Landon McDonald
[view]
“I may not look it now, but I'm the son of a wealthy Carcino merchant. I believed that you could move the world if you but had the gold. Money was everything, and with money, nothing was beyond my reach! I adored money! I loved money! You see?”
—Rennac talking to Dozla in a support conversation

Rennac is a playable character in Fire Emblem: The Sacred Stones.

Before the events of the game, Rennac is the son of an unnamed, wealthy merchant in Carcino. His supports with Colm indicate that he has siblings, and went into the thieving trade as he did not like hard work, something which his father had him do a lot when he was young. Eventually, he took a job as one of L'Arachel's bodyguards under the belief that he would be well paid because of her standing as a Princess of Rausten. However, he realized that he had made a huge mistake, as she never paid him, nor did he like her that much. Despite his numerous attempts to leave, he kept finding his way back to her.

Rennac is first seen in Chapter 4 along with Dozla and L'Arachel. The three are standing atop a large rock incline and see the large group of monsters below attacking people. Dozla and L'Arachel say they must rush down the slope to aid them. Rennac stops them from doing so, stating that they should find a safer way down to avoid injuring themselves, which they heed. By the time they get down, the battle is already over.

In Eirika's Route he can be found in a house hiding from L'Arachel and he hands over an item to whoever visits him to ensure they won't reveal where he is hiding.

In Chapter 14, he appears as an enemy unit (either hired by the enemy in Eirika's path, or acting freelance in Ephraim's), though he has no intentions of fighting. If Eirika/Ephraim talk to Rennac, he joins their forces upon being paid 10,000 gold (9,980 in Eirika's route). If L'Arachel talks to him he'll complain and resist but eventually crack and agree to fight with her.

Rennac is apparently also an excellent dancer. When he was young, he would dance with his father's female associates in order to entertain them. His dancing skills were also shown in his B support conversation with L'Arachel where he danced with her.

*2 less in the Japanese version

**5 less in the Japanese version

***1 less in the Japanese version

****8 less in the Japanese version

Rennac is a lategame promoted rogue that the player acquires. Despite his high joining level, his base stats are lackluster and his use as a combat unit is very limited as a result. As he is a Rogue, his primary function is to aid the player in pickpocketing items from enemies, finding hidden items from the desert past his join time, and opening doors and chests, and can save Colm from taking this support role.

Another note is that he is carrying the elusive Member Card, which allows access to Secret Shops. This is extremely valuable, as the other way is through the Lagdou Ruins, which is both time consuming and carries a very high risk.

Rich "Merchant"
A thief forced to accompany L'Arachel on her adventures. Member of a wealthy merchant family and well-versed in the ways of the world. Appears in Fire Emblem: The Sacred Stones.

(If you have enough gold)

(If you don't have enough gold)

(If you didn't recruit him, and talk to him with Eirika again)

“Great. This is just what I needed...”
—Death Quote

“Come on... You can't be serious!”
—Rennac's Final Chapter quote

Rennac, Rich "Merchant" (豪商盗賊 Gōshō tōzoku)
"L'Arachel summoned Rennac back to Rausten, and he was forced to return. He was never able to escape his service to the self-centered princess who became queen. Admittedly, he didn't try very hard."

Rennac is illustrated in the trading card game Fire Emblem Cipher with the following cards: 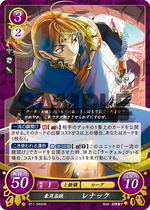