Prince of Crimea
Commander of the Crimean Royal Knights (Formerly)

Luis Bermudez
[view]
“As long as I live, as long as I am able to walk, and as long as I draw breath, I shall fight. It is my duty.”
—Renning, deciding to join the fight.

He personally helped lead the disarrayed Crimean forces against the invading Daein, marching to the front lines in order to help buy Elincia enough time to escape, but he was defeated along with the king after a direct confrontation with the Mad King Ashnard himself.

However, instead of being killed like Ramon, Renning was captured by Daein and turned into their own knight, by experimenting on him with Izuka's feral elixir (which was meant only for laguz). He then became Bertram, one of the Four Riders of Daein in The Mad King's War. After the Crimean Liberation Army defeated him, Bastian realized Bertram was in fact Renning, and though he was thought to have perished during the battle at Fort Pinell, Bastian had secretly recovered his body with the intention of healing him of his ailment.

During most of Radiant Dawn, Bastian had Renning in Castle Fayre, the former desperately trying to find a cure for the latter but to no avail. Some time after Daein's liberation Bastian hired Volke to seek a cure for Renning, which led to the eventual capture of Izuka and his detainment at Castle Fayre. Once Ashera cast her judgement upon Tellius, Bastian and Geoffrey set off with the still-crazed Renning and the fugitive Izuka to search for Reyson. After Izuka is slain, Reyson heals Renning with the Galdr of Rebirth, and the latter joins the party the night before the decisive battle within the Tower of Guidance.

Geoffrey did mention that he now held Renning's old title and that he "wouldn't give it up easily". Renning then said that he "would remind him why he once held that position".

At the end of Radiant Dawn, instead of becoming king, he decided to help Queen Elincia, his niece, govern Crimea.

As a knight, Renning is known to be a peerless warrior and whose bravery was said to be unmatched. Besides his bravery, Renning was also known to be quite politically capable due to his royal heritage as the king’s younger brother. He was also extremely popular among the people.

Though this popularity led to his nomination as the next king, he was also the one with the greatest sympathy for Elincia’s situation of being raised in a secluded villa.

Despite his many ordeals through the series, the gallant figure he was known for had not changed after his recovery, being an inspiration for Elincia and those around her.

Renning is a decent enough unit on his own, but his incredibly late availability means that he has to contend with incredibly powerful units such as the Royal Laguz for a spot in the very limited deployment limits of Radiant Dawn's Endgame maps. Unfortunately this is a contest that Renning often loses, since Gold Knight's stat caps are subpar compared to most other classes. Should the player desire a Gold Knight, a trained Titania or Kieran will often outshine Renning statwise as well by the time he joins.

Should the player truly desire to use Renning, he can be effective in Rebirth 1 and Rebirth 2, since his access to Axes means he can use Hammers against the many Generals that populate these two maps. Renning can also use the Alondite or Vague Katti to decent effect, although not to the same effectiveness of a Trueblade such as Mia due to his inferior Speed cap.

Overall, Renning can be okay filler if the player finds themselves with an empty slot for the endgame, but can struggle to justify being used if the player has a trained team ready to go.

Dread Cavalier
One of the Four Riders, the strongest of Daein's generals. No one knows who it is that wears the helm and armor. Appears in Fire Emblem: Path of Radiance.

All Crimea rejoiced at Renning's return. He chose to forego the limelight, helping the queen to keep the peace.

Renning is illustrated in the trading card game Fire Emblem Cipher with the following cards: 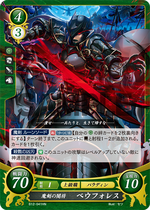 "Bertram" is the name of a warrior from Canto 28 of Dante Alighieri's Inferno. He is described as mad, explained by the feral potion, and serpent-like, which explains Renning's hissing when he is Bertram. Bertram is also a variation of the English name "Bartram," which means "glorious raven," likely referencing his black armor.