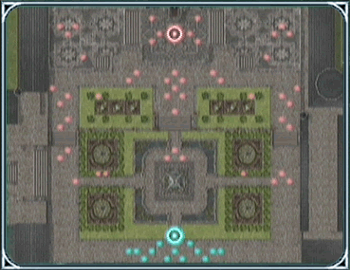 Chapter script
[view]
“The Crimean royal palace, located in the center of Melior, is famed for its beautiful gardens where the world seems at peace. But times have changed. Countless battles have raged in these idyllic confines, and a new dark lord now sits upon the throne. The palace itself has not suffered-- it remains a study in dignity and elegance. Yet there is no peace on this day. A grim tension fills the air, engulfing all it touches in deafening silence. Within the heart of the palace sits the author of this war: Ashnard, king of Daein. Ike, supreme commander of the Crimean army, and Elincia, princess of Crimea, have completed their battle preparations. Now, they spend a tense morning waiting for the decisive battle that will conclude their yearlong odyssey. They wait for the beginning of the end.”
—Opening Narration

Repatriation is the Endgame of Fire Emblem: Path of Radiance. The boss of the chapter is the "Mad King" Ashnard. The chapter takes place in the Crimean castle courtyard in which the player battles Daein's remaining soldiers and the final of the Four Riders, Bryce. In Easy and Normal Mode there are 50 enemies. In Hard mode there are 40 enemies and 4 Paladins and a Bishop that appear around Turn 10. In all three modes the goal of the chapter is to defeat the boss, Ashnard, but in Hard Mode he must be defeated twice. The player can select 14 units for this battle, but must include Ike and either Nasir or Ena, depending on which previous conditions were met. The player also can select one high-level laguz, either Tibarn, Naesala or Giffca, on the second-turn in Easy or Normal Mode, or after Ashnard touches Lehran's Medallion and goes insane in Hard Mode.

In all modes, 20/20 Ike is extremely useful. He can hold his own against most enemies easily, and heal if you gave him Aether.

The enemies are in 3 groups in these modes (Left, Right, and Center). Tibarn, Naesala, or Giffca can be called on the second turn and whoever is chosen will appear on the next turn. Ike and the chosen Laguz royal should be the front line of the party, and can probably take the center on their own. Split up your other allies amongst the two sides, and try to plow through the enemies. You should engage Bryce with Ike, who should not cause him too much trouble. Ashnard will not move, and Ike plus the Laguz king and dragon (the only people who can hurt him) should finish him quickly with some healing.

Once again the foes are in the same 3 groups, but the same strategy does not work. Ike can hold most of the middle group on his own, but the Laguz King does not show up until Ike has defeated Ashnard the first time. Bryce and the feral dragons are the only ones who can deal significant damage to Ike, so make sure they do not all attack him at once. In hard mode, Ashnard moves if a playable character moves into his range, meaning he should not be combated until Bryce and a number of feral Dragons are taken out. Ashnard can be taken out as long as the Bishops capable of healing him are KOd. After he is defeated, Ashnard goes berserk, giving him boosts to HP, strength, skill, and speed (though not enough to double Ike if he has capped Speed). However, this battle is actually easier than defeating the first Ashnard, as a Laguz royal can be summoned. The easiest way to kill him is to use Giffca, as he can do the most damage and take the least per hit. Just use the same strategy, and make sure Ike (and preferably the Laguz King) do not die.

Another strategy to use against Ashnard is to give Ike the skills Wrath and Resolve, making him the most overpowered unit in the game. With this combination it is possible, but also a little risky since it involves bringing Ike's HP to a dangerously low level that can possibly put him in KO range if Ashnard lands a hit on him. If you managed to recruit Nasir, you can give Wrath and Resolve to him instead.