View source
watch 17:07
'Fire Emblem: Path of Radiance' - Chapter 2
Do you like this video?
Play Sound 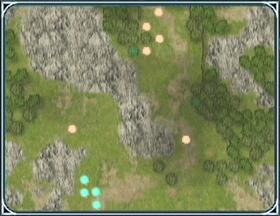 Chapter script
[view]
“It's Mist and Rolf... They... They've been taken by bandits!”
—Rhys

Rescue is the Chapter 2 of Fire Emblem: Path of Radiance.

The chapter begins with Mist and Rolf, the youngest members of the Greil Mercenaries, being kidnapped by a disgrutal group of bandits. This is the bandit group's retaliation for the Greil Mercenaries having defeated them when they were ransacking a small village in Chapter 1 of Path of Radiance: The Battle Begins.

Soon after the kidnappings Ike, Boyd, Oscar, and Rhys realized that Mist and Rolf were missing. After discovering what had happened the group of four set out after the bandits without any other help, as the other Greil Mercenaries were on a separate mission elsewhere.

Eventually Ike, Boyd, Oscar, and Rhys arrived at the location that the Bandits were at. The bandits then taunted them, revealing that Rolf and Mist were trapped inside a Shack located behind the bandits on the map. The Bandits also inquire as to where Titania is, as she had lead the attack on the Bandits in the village the chapter before.

Ike, Oscar, Boyd and Rhys will then choose to fight the Bandits and rescue Rolf and Mist despite the fact they are severely outnumbered.

The battle of Chapter 2 is an uphill battle, literally. The shack in which the kidnapped Rolf and Mist are trapped in is located at the top of the hill. Up along the hill the Bandits are spaced out ready for combat.

Off to the bottom-left of the map is a small alcove, blocked off by the rocky hillside. The only way to access this alcove is by entering it from the bottom-left. This alcove can be used tactically in the early turns of the battle to create a safe area to create a bottle-neck effect in. This is especially effective on Hard Mode and Maniac Mode.

Up along the hill there are a few randomly placed trees and thickets. These can be used tactically in battle to create 'walls' and to use the thickets for battle bonuses. However, they can not be depended on much in an active strategy because of their placement on the hill. They can, however, be used effectively as a player forges their way up the hill against the Bandit forces.

Also, parts of the far left side of the map are inaccessible, and thus will not really play into any strategy a player can have.

As previously stated, Chapter 2: Rescue, is literally an uphill battle. In this battle the player will have only four units to control, one of which being Rhys, who can not attack. This leaves the player severely, although of course not hopelessly, outnumbered.

At the beginning of the battle the player will most likely notice an alcove to the bottom-left side of the map, just to the left of the player's character's deployment area. This alcove will on most modes only have a single enemy standing in it, who can easily be defeated, however on Hard and Maniac Modes a larger group of enemies will be in the alcove at the beginning of the battle.

This alcove can be used to create a bottle-neck once the enemies within it are defeated. The player can set up their attacking units in the entrance of the alcove to block it off, and Rhys can stand behind the blockade and heal anyone who is injured by the enemy attackers.

As this suggests, the enemy units near the bottom of the hill will converge on the player's units. Although they can be easily defeated if the player uses the alcove or another well planned strategy. Also it should be noted that within the first few turns Titania will arrive to help the others.

At the top of the hill, near the shack is the boss. He is not a particularly difficult boss and can be easily killed in a few rounds by the player's attacking units. The boss will drop a rare Speedwing, a stat boosting item upon his defeat.

On Hard Mode, there will be a considerably larger amount of enemies to face. Despite this the same strategies and concepts apply as in other difficulty modes.

Also on Hard difficulty it will be considerably more difficult to protect Rhys, the only usable unit with no means of attack. Still, however if the player is careful and tactical in their planning it is not a particularly difficult chapter to win.

In Chapter 2: Rescue, one new unit is available for use.

This new unit is Rhys. Rhys is the sickly, frail, resident healer of the Greil Mercenaries. Rhys is the only healer the player will have control of in the early part of the game. This fact alone makes Rhys an extremely valuable unit to have and use, but on top of that, Rhys is also the ONLY player-controlled unit in Fire Emblem: Path of Radiance who can eventually use Light Magic. Being a magic user Rhys is weak to physical attack, so he will require a good deal of protection early on. However, later in the game he will be able to defend himself decently well with his Light Magic.