Varies
[view]
“A special staff that returns an ally to the user.”
—In-game description, Shin Monshō

The Rescue Staff (レスキューの杖, Resukyū no tsue lit. Rescue Rod) is a recurring Staff in the Fire Emblem Series. When cast, this staff allows its user to warp a selected ally unit in range to a space adjacent to the user. This staff's useful ability is offset by its low durability, which usually range from around 3 to 5 uses.

This staff is especially useful in Chapter 19 of Thracia 776, where the player's units are burdened with not just the need to retreat, but also the herculean task of protecting slow-moving civilians from being captured by high-levelled mounted unit reinforcements.

The staff is simply called Rescue (七難即滅 Shichinan Sokumetsu lit. Destruction of the Seven Calamities in the Japanese Version) and reappears as a Rod in Fates.

“Moves allies from distant spaces to adjacent ones.”
—In-game description, The Sacred Stones

** Only if the Rescue Staff wasn't obtained in the First Generation or wasn't passed down to the Second Generation.

The Rescue Staff, as it appears in the second series of the TCG. 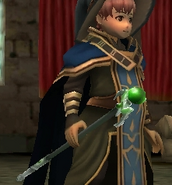 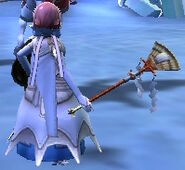 Sakura with Rescue in Warriors.

Animation of Yuliya Rescuing Marth in Fire Emblem: Mystery of the Emblem.

An enemy Bishop Rescuing a Lance General in Radiant Dawn.

Merric being Rescued in New Mystery of the Emblem.