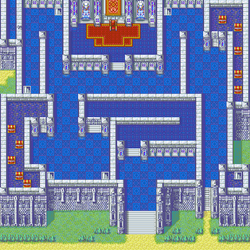 Zeiss (Enemy, talk with Melady)
Hugh (Enemy, recruit with Roy, though you have to pay him)
Cath (Enemy, if you haven't recruited or killed her already, talk to her in 3 separate chapters with Roy)

Chapter script
[view]
“After rescuing Fae, Roy led his forces toward Aquleia. As the capital of Etruria, Aquleia was the largest, most prosperous city on the continent. Preparing for the Lycia Alliance Army's attack, the Revolutionaries were concentrating their forces in the palace. The Revolutionaries' original plan was to use the city walls for defense, but since the Elimine Church had turned to the Alliance Army's side, they were forced to retreat and shell up inside the palace, fearing that the Church may have encouraged the civilians to protest. The Elimine Church was established by Saint Elimine, one of the Eight Legends. The Church had followers all around Elibe, primarily in Bern and Etruria. With the Church's support, Roy was able to arrive at the palace with ease. However, Bern's southern dispatch led by General Narcian was waiting for him inside.”
—Opening Narration

You can haggle Hugh's price down from his initial asking price as many as 3 times, but this is not recommended, unless you want him solely for his Member Card, because his stats decrease each time you do.

If you have recruited Cath in a previous chapter, you won't have to worry about the chests being looted, as no other thieves spawn in this chapter aside from her.

Because of the locked door in the middle of the map, General Douglas and Hugh both move toward the right entrance. Make sure to move Roy in that direction, so as to help against the axe fighters that will come toward the right side group, as well as to recruit Hugh, if you want to.

To get past Douglas without endangering either him or your units, it is recommended that you use a Sleep staff on him to slip your army past. Once he awakens, he can be kept out of the way by baiting him with a high-evade unit, stripped of any weapons, but carrying a few healing items in case he does hit.

You can either make him move in a circle, or simply lure him to the entrance of the eastern treasure room, where another unit can provide backup and support bonuses. Rutger is highly recommended for this, as he can become a Swordmaster and supports with Clarine, who can provide healing from within the treasure room.

Although there is a variety of units (and many of them), you shouldn't be overly worried, since you can make use of the locked door in the middle of the map! Use your Nomads/Archers as they pass by to pick them off and any other units with ranged weapons while the door is locked (for slower but safer results).

The reinforcements that come in from the stairs are largely Mercenaries, with Mages and Fighters also thrown into the mix, so two really good choices would be Cavaliers/Myrmidons to hold the line/ advance on the enemies after opening the door.

You should also use other units with high Resistance and Avoid, because of the several Mages and Bishops, a few of which have long-range Bolting and Purge, respectively.

Zeiss can be recruited with Melady, and he has astounding hard mode bonuses (19 Strength at Level 7). He has similar stats to his sister, except he has higher Strength but lower speed, higher defense but even lower luck, higher HP but even lower resistance. Overall, he'll have high stats in everything except Luck and Resistance, similar to his sister.

Melady is an extremely useful unit on her own, so with some help from Zeiss, you've got yourself a great Wyvern duo, which will help in many later chapters.

There's also an arena in chapter 17 of either the Ilia or Sacae route, so Zeiss can reach Level 20 with ease using those.

Make sure Melady and Zeiss are both recruited and alive to get the gaiden chapter for Apocalypse, and they're some of the few units who can reach the secret shop in chapter 21, as well as talk to Galle, so Chapter 21 is just one of the chapters they'll be heavily useful.

There's a secret shop where Zeiss starts, and it's the first in the game. To access it, use Hugh's member card (obtained by stealing it or recruiting him), and it has Lockpicks, Angelic Robes, and all promotion items for sale. The silver card from Chapter 14 will prove very useful here, and Arena abuse will make the promotion items both effective and affordable, so do so if you have the patience for it.

The last opponent, of course, is Narcian. He's far stronger than his underling, Flaer, was, naturally. He has a Runesword and Delphi Shield as well as decent speed for his class. This lets him recover HP on top of the throne recovery, he mitigates his flying weakness, he's somewhat difficult to double, and he has decent avoid due to his respectable luck and speed and the throne. Ideally, the thief you most likely brought would steal his gem (which he also possesses) and shield and then proceed to unleash a barrage of arrows from snipers/nomad troopers you've brought as well as Aircalibur from Lilina/Lugh (or both). Whether or not you've stolen the Delphi Shield, strong lance users or a well trained Saul or Raigh would come in handy.