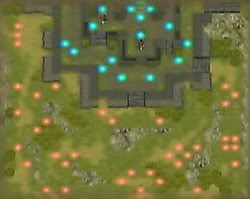 Defend for 10 turns or Defeat boss

Chapter script
[view]
“General Zelgius' plan succeeds in breaking the morale and momentum of the laguz forces. Skrimir accepts a challenge to single combat with Zelgius and barely escapes with his life. His defeat sends a wave of doubt and fear through the Laguz Alliance. Ranulf, knowing that the situation has turned against them, orders a full retreat, and the beast tribes use the three days offered by Zelgius to recross the Ribahn and begin the long march back to Gallia.”
—Opening narration

Retreat! (撤退戦 Tettaisen) is chapter 3-5 of Fire Emblem: Radiant Dawn. Lethe, Mordecai, Lyre, Kyza and Ranulf are unavailable for this chapter. The mission consists of either defending the green spot for ten turns, or defeating the enemy boss.

With General Skrimir severely wounded by General Zelgius, the Laguz Army troops' morale drops; their leaders decided to retreat to Gallia after Zelgius announces a three day ceasefire. However, the Greil Mercenaries stay at Castle Seliora while the Hawk Tribe gathers information about the enemy, and the Beast Tribe retreats, crossing the Ribahn River once again.

Meanwhile, a senator and his general, Lombroso, decide not to follow Zelgius' orders and take matters into their own hands...

If you do not quite feel confident in all of your units, the defensive route should be best. One strategy for that is to shrink your area to the top ledge and have Ike defend the one space wide stairs on the left with his support partner nearby. Have Nephenee and Brom guard the left gap from the top. Oscar and Boyd should defend the right gap from the top, with Mist nearby for healing and Shinon on the ballista. Mia and Gatrie should be able to defend the right staircase. Rolf should be on the center ballista, with Rhys a bit to the left. After that's done, Rolf or Shinon should fire each turn so that one shot can be fired each turn. The rest is mostly just making sure none of your units take one too many hits.

Another strategy for playing the defensive route would be to put Nephenee and Heather on the right side, with all the mages (Rhys, Soren, and Ilyana are available) behind them to help with Heather's weakness against the armored generals, and Brom and Gatrie in the middle with Titania and Oscar behind them. This is not the recommended route as many of the weaker characters can receive in one turn as many as three or four big blows from the cavalry, eliminating them from the game.

Alternatively, the wider lower platform can sometimes be easier to defend due to the increased mobility and less clutter of units.  Use four tanker units to defend the steps - you should have at least four capable of performing this role by now, typically Brom, Gatrie, Titania, and Haar, although Nephenee can be extremely capable (and perhaps even overpowered) if you've trained her properly.  Perch all your other units atop the ledges; the vast majority of the enemies that will swarm you are not capable of ranged attacks, and those that are will rarely manage to land blows firing uphill.  Ryhs and Mist perform healing duties, one on each side of the fort, while any leftover mounted units with Canto (Oscar, and Haar or Titania if you have another tanker) can perform counteroffensive strikes at the steps - use a tanker to kill one unit, mounted unit runs into the hole, kills another, and retreats.  Rolf and Shinon should expend all the ballistae rounds as quickly as possible, and then move down to the ledges to continue the slaughter.

It is more or less impossible to have every ledge guarded by the end of the first turn; however, an examination of enemy movement ranges shows that not every ledge needs to be guarded for the first enemy turn.  Place the units close enough at the few ledges that are under threat, and the remainder of your units can catch up and fill the last holes by the end of the second turn.  As the initial wave of attackers subsides, shuffle your defensive posture to ensure you have your least agile units defending the farthest away ledges with the least enemy activity.

The advantage of using the wider lower platform is that it has far fewer problems with units getting in each others' way.  Additionally, for players seeking more unit experience, a boss kill, and a lower turn count, the lower platorm allows much faster enemy ingress, and therefore potentially much faster slaughter of enemies, allowing a faster counterattack and victory.

On the downside, there is one extra stair space that requires an extra tanker unit to defend; if one of the aforementioned tankers (typically Brom) has been undertrained and is not up to the task, this strategy can quickly and catastrophically fail, as the vast number of ledges needing defending leaves very few units available for a QRF (quick-reaction force). 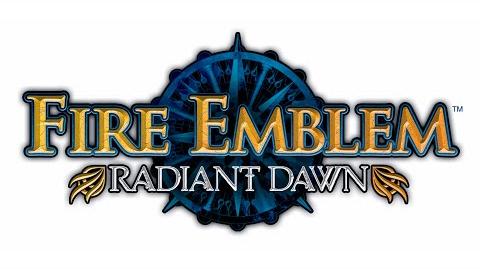