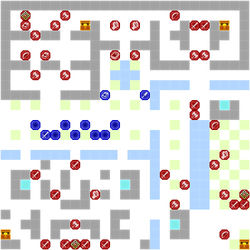 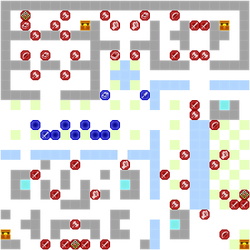 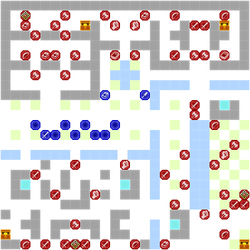 Byleth, Ferdinand, Lysithea and 8 others

Chapter script
[view]
“Amid riods in Hrym territory, Ferdinand learns that his missing father, Duke Aegir, has been found. Lysithea, who knows the area well, goes with him to investigate”
—Opening Narration

Retribution is Ferdinand and Lysithea's Paralogue Chapter in Fire Emblem: Three Houses. This chapter takes place in Empire territory, and is available on all routes except Crimson Flower.

After losing his title and escaping from his house arrest, Duke Aegir flees to Hrym territory, but is subsequently chased down by rogues. Once they catch up to him, they accuse him of making their lives painful and miserable after the Adrestian Empire took over their territory, imposing heavy taxes and forced labor. They decide to take revenge on him, to his horror.

Meanwhile, Ferdinand and Lysithea are with Byleth, trying to find a snack to go with tea, when a knight comes to Ferdinand with a report on his father's whereabouts. He was last seen heading through Hrym to allied territory before disappearing, and Ferdinand decides to set out immediately in search. Lysithea offers to come along, as Hrym and Ordelia shared a border and she is thus familiar with the territory. She also asks Byleth to join them.

After they quell the riots, they discover that Duke Aegir has been slain. Ferdinand grieves for a moment, but tells Lysithea that his father may have gotten what he deserved.

Back at the monastery, Lysithea decides to tell Ferdinand and Byleth what she knows about Hrym. When Emperor Ionius IX tried to consolidate power, House Hrym opposed the move and attempted to join the Leicester Alliance with the help of House Ordelia. The Empire found out about it, however, and quelled the insurrection. A puppet leader was installed in House Hrym while Duke Aegir took control of the territory.

Seeing this, the nobles began to fear the emperor would assume total control, so the six noble houses wrested power from Ionius IX in what became known as the Insurrection of the Seven. Meanwhile, in Hrym, Duke Aegir made the lives of the people very challenging, so many of them fled to Ordelia territory. However, as retaliation for Ordelia's involvement in the Hrym rebellion, the Empire had taken control of Ordelia territory as well, so they sent the people back to where they came from.

When Duke Aegir fell from power five years ago, after Edelgard seized power, Lord Arundel took over management of Hrym territory. In Duke Aegir's name, he made the people of Hrym suffer even worse hardships. Ferdinand is shocked that Arundel stoked the fury of the people and directed it at Duke Aegir. He thanks Lysithea for telling him this and decides to atone for what his father did. He decides to think about what he'll do after the war.

Enemies spawn on the enemy turn

Reinforcements stop once the Grappler and Swordmaster Generals have been killed.

Once the Map start, Ferdinand and Lysithea advise you to leave the northern part of the map alone and instead to focus on the southern part. This is solid advice, as your top priority is to rescue all of the villagers. This can be done by either, ending a units turn on one of the 4 tiles where a villager resides, of by killing one of the 4 units on their way to these tiles (the villagers will thank you when you kill the correct enemy). It is best to first focus on the 2 bosses in the South-East and South-West, as killing these will end the enemy reinforcements. Leaving a unit or two in the center of the map, should be good enough to take care of the enemy reinforcements (even on Maddening). Once the 2 Southern bosses have been killed, the map becomes a standard Route the Enemy map. Lure in the enemies in small groups with a tanky unit (Ferdinand, if trained) and then kill them on your turn.