Return of the Prince

Return of the Prince

Chapter script
[view]
“Transported to Altea’s outskirts by Gotoh’s mighty Warp magic, Marth and his army finally began the battle to liberate their homeland. However, General Eibel, commander of the Archanean army, ordered the Gra knights to attack, in order to buy time. In the meantime, he prepared his own devious tactics with the aim of crushing the Altean army in one fell swoop. With their dear homeland before them, Marth and the others start yet another battle. “Recapture Anri, our capital! We shall now reclaim our homeland!” Prince Marth’s voice resounded through the serene skies of Altea. One of the objectives of their long and difficult journey was already within reach.”
—Opening Narration, Shin Monsho
“Marth and the others were transported to Aritia's outskirts by Gato's magic. They were ready to begin the battle to reclaim their homeland. The commander of Akaneia's army, General Eibel, had ordered the Gra Knights to charge, to buy time. At the same time he prepared many dishonourable tactics, and waited for the chance to defeat Aritia's army in one swift blow. Before his fond homeland, Marth's battles were about to begin once again. "We will reclaim our capital of Anri!! We will reclaim our homeland!!" Prince Marth's voice resounded through Aritia's skies. They had travelled a difficult journey, but their destination was finally reached.”
—Opening Narration, Mystery of the Emblem

Return of the Prince is Chapter 15 of Fire Emblem: Mystery of the Emblem and its remake.

The general in the jail with Est will not attack unless the door is unlocked OR Abel is recruited. 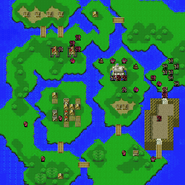