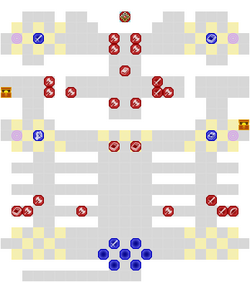 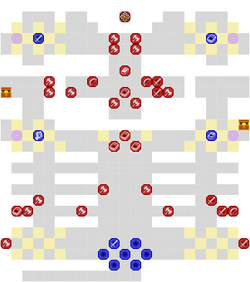 Return to Me/Script
[view]
“I've invested everything to ensure my success today. My private funds, a veritable army... Surround them! Don't let them escape! The ritual will not be stopped.”
—Aelfric

Return to Me is the sixth chapter of the Cindered Shadows side story of Fire Emblem: Three Houses.

At the Holy Mausoleum, the Ashen Wolves wake up, and Aelfric tells his master plan to get the descendants of all Four Apostles together and gather the Chalice of Beginnings, in order to revive a certain someone. Aelfric starts draining the life force of the Ashen Wolves to prepare the Chalice. When asked for his last word, Yuri reveals his own Master plan. He was working with Rhea, long before he started working with Aelfric, to keep an eye on him, as Rhea was already suspicious of Aelfric. Aelfric was however keeping Yuri's mother and former gang hostage, so Yuri's movements were restricted. Today however, Aelfric used all of his goons to attack Garreg Mach, in order to lure the Knights in. This allowed Yuri to free the hostages and ready himself to oppose Aelfric. Balthus escapes the bonds that were already half sliced-through and Constance can free herself, as she is no longer silenced. Aelfric orders his units to kill the Ashen Wolves, but then Byleth arrives with his student in order to save them.

After being defeated, Aelfric reveals the woman he is trying to survive is in fact Sitri, Byleth's mother and tries to convince Byleth to help him revive her. Although Sitri died 21 years ago, Aelfric came upon her body 10 years ago, with her body appearing to be frozen in time. At that moment Rhea arrives and Aelfric blames her for Sitri's death and demands to know what Rhea has done to her. Rhea retorts by saying Sitri made the choice to die, so her offspring could live. Aelfric does not believe Rhea and teleports away while lamenting on his past with Sitri.

This chapter features "vortex" terrain; there are four vortices across the map, and the Ashen Wolves cannot step on them. While they are active, the Ashen Wolves will suffer poison, and Aelfric will receive +99 to both his Defense and Resistance. The vortices will be disabled and disappear completely once a unit has been placed on all four of them at once.
At the start of enemy phase 1 and turn 10, if the vortices are still active, all units except for Aelfric will take 10 damage.
The goal of the chapter is to rescue all 4 of the Ashen Wolves and occupy the 4 nearby vortices at the same time. The bottom side of the map has relatively few units, while the top part has a massive number of enemies.; they won't actively attack or chase your units unless they're in range or if your units attack them first. Located in the center however, are 4 Warlocks with Bolting. Luckily your Ashe has a retribution Gambit, which allows your units to counterattack from any range. Use this gambit to kill the 4 Warlocks, then advance on both sides of the map towards the North.

Once you get in range of Aelfrics Meteor, use a Resistance heavy unit to tank both hits before advancing. As the top part of the map is pretty swarmed with enemy units, it is best to save your Gambits for this part. Once all 4 vortices have been occupied, you can start your attack on Aelfric. As he does not have Counterattack, he can be easily taken out by your Archers/Mages