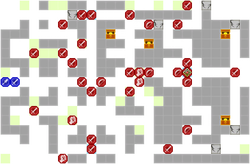 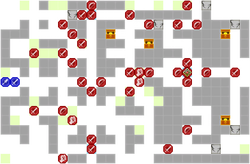 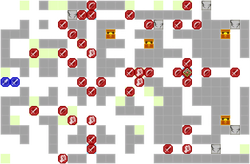 Chapter script
[view]
“Vile thieves run rampant. They pillage and loot to their heart's content. I must kill them. Every last one. It's time to hunt down their nest.”
—Dimitri

Reunion at Dawn is the first chapter of the Azure Moon route, accessed when Byleth chooses the Blue Lions house. In this chapter Byleth is reunited with Dimitri and the rest of the Blue Lions.

Dedue will not rejoin in this chapter, instead being replaced by Gilbert.

A mysterious voice urges Byleth to wake from slumber. When Byleth awakes, they find themselves in a village near the base of Garreg Mach Monastery. A villager answers Byleth's questions and tells them that it is the Ethereal Moon of the year 1185 and the day before the millennium festival. Byleth sets out for the monastery despite the villager's warnings about bandits.

Byleth heads to the monastery and discovers Dimitri, now a haggard, broken, and vengeance-obsessed vagrant. Dimitri thinks that Byleth is a ghost come to haunt him. After convincing Dimitri that they are alive, Byleth follows Dimitri to the cathedral where he reveals his mission to hunt down a gang of thieves near the monastery. Dimitri leaves to battle the thieves and Byleth then follows to assist him. As Byleth and Dimitri battle the thieves the Blue Lions and Gilbert come to their aid, and at the end of the battle, they are reunited.

After the battle, Gilbert reveals that Dimitri was presumed dead, however, Dimitri explains that he escaped execution when Dedue sacrificed himself and was executed in his place. Gilbert further explains that the western half of Faerghus led by the traitor Cornelia has pledged loyalty to the Empire and is now being called the Faerghus Dukedom. Houses Gautier and Fraldarius lead the resistance in the eastern half of the Kingdom. Gilbert begs Dimitri to reclaim Fhirdiad and become a beacon of hope for his people, and Dimitri declares his intention to slaughter every last imperial. Afterward, in the monastery, Gilbert reveals that Rhea has vanished and that the Knights of Seiros have been searching for both her and Byleth. He recounts how Rufus, Dimitri's uncle and the king regent, was murdered, and Dimitri was falsely accused of the crime and apparently executed. Three years ago, Gilbert heard rumors of imperial generals and troops being brutally slaughtered, and came to believe that Dimitri had somehow survived. Realizing how far Dimitri has fallen, Gilbert asks Byleth to guide him back to sanity.

Only Dimitri and Byleth are available at the start of the battle.

As the battle unfolds, the Blue Lions will slowly rejoin the fight. On Turn 3, Gilbert and Ashe appear in the northwest corner of the map and Annette and Mercedes in the southwest. Felix, Sylvain, and Ingrid appear in the northeast after a unit reaches the ninth column and the first set of reinforcements have already arrived. This is the only route in which Gilbert is recruitable.

All other students that Byleth recruited prior to Chapter 12 will become available at the end of the Chapter. If War for the Weak was completed, Dedue will be playable, but not for a few chapters. If it was not completed, he is not playable for the rest of the route. If Lorenz was recruited into the Blue Lions, he will also not appear initially. He will reappear in Chapter 16 as an enemy but can re-recruited when defeated.

At the beginning of this chapter, your entire inventory will be repaired and Dimitri will automatically be reclassed to the High Lord. You don't get an opportunity to visit the monastery and are instead thrust straight into the battle, so you'll need to survive with what you've got. Fortunately, as long as you aren't too reckless, this is a fairly straightforward battle: just lure in the enemies one or two at a time, and you should be fine. Do not engage enemies from both the north and south sides at the same time at the start, or you will prompt them all to start advancing on your position. Don't forget to open all four chests before you leave.

Gilbert makes a decent replacement for Dedue, especially if he's dead; he isn't quite as bulky, but he has a much easier time reaching Great Knight.

When you defeat Pallardó, it will be revealed that the man you just defeated was a body double and the real Pallardó appears and makes a break for it. By the time you reach him, you should have wiped out all the other enemies, so taking him out before he escapes should be no problem.

For those playing on Maddening Mode a soft lock for the Campaign is very possible on this level. Due to the lack of a prep screen, amount of forced unit deployment, and forced unit positioning it is very possible that you will come into this level unprepared for a victory. For this reason, it is recommended you open a separate save file before Chapter 12, any preparation issues for Chapter 13 must be addressed before playing Chapter 12.