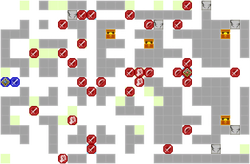 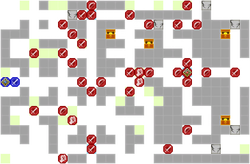 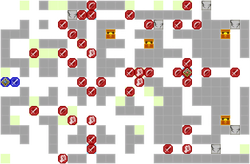 Reunion at Dawn is the first chapter of the Verdant Wind route, accessed when Byleth chooses the Golden Deer house. In this chapter, Byleth is reunited with Claude and the rest of the Golden Deer.

A mysterious voice urges Byleth to wake from slumber. When Byleth awakes, they find themselves in a village near the base of Garreg Mach Monastery. A villager answers Byleth's questions and tells them that they it is the Etheral Moon of the year 1185 and the day before the millennium festival. Byleth sets out for the monastery despite the villager's warnings about bandits.

Inside the monastery Byleth encounters Claude. Claude, while happy to see them, mildly chastises Byleth for oversleeping while also commenting that a new dawn is coming. After having a small meal, Claude asks Byleth indirectly to help him deal with a gang of thieves near the monastery. As Byleth and Claude battle the thieves, the Golden Deer come to their aid, and at the end of the battle they are reunited. Byleth learns that the Leicester Alliance is divided between those who support the Adrestian Empire and those against it. Claude says that the infighting is necessary because of the Empire at their door.

After a some catching up, they head deeper in the church where some thieves are hiding out. With the arrival of the other Golden Deer, they take out the thieves. The reunion party is moved to the cathedral where Claude suggests to make the Garreg Mach Monastery the base of operations. The rest of the Golden Deer then reveal that Claude is the leader of the alliance and that he plans to take down the empire. Of course they all offer their help. Byleth joins up too although their ultimate goal is to find Rhea.

The teachers and the Knights of Seiros eventually return to help fight the empire. They apologise for leaving the monastery in ruins and help to fix it up. Seteth also decides to seek out some craftsman to help as well.

Though the battle begins with only Claude and Byleth, as the battle progresses, more of the original Golden Deer join in the fight. On turn 3 Lorenz and Ignatz enter from the northwest corner of the map while Hilda and Leonie enter from in the southwest. On turn 5, Raphael, Lysithea, and Marianne will join from the Northeast.

When you beat Pallardó for the first time he will spawn in a random direction (north or south) with 1 thief and 1 brawler while heading for the leftmost exit.

Because of Claude's new Wyvern Master class, he gains a weakness to bows while mounted. Although he is a spectacular unit, it's important to make sure you dismount and utilize forests to dodge enemy attacks, particularly early on. Because Byleth and him are the only units available for the first two turns, surviving is of paramount importance, and thus reducing the damage taken by enemy archers will help him.

At the start of Turn 3, Lorenz and Ignatz will appear to the left of the starting position. If they are using their "canonical" cavalry and archer classes respectively, they can greatly help relieve stress from Claude/Byleth by picking off enemies as they advance. To the right, Leonie and Hilda will appear. They can also help relieve stress, but due to the lack of a barrier, the enemy Assassin General can be dangerous. Make sure they advance carefully and ideally reunite with the others before they can be targeted.

It is wise to direct your troops to the left of the stairs leading to the boss, as when you get close enough, Raphael, Lysithea and Marianne will arrive at the top-left corner (assuming the camera is facing the same direction as Claude and Byleth at the start). This is important, as Marianne is likely the only healer out of all of the Golden Deer characters, and her assistance can be invaluable. Due to Lysithea and Marianne's fragile defense, Raphael should be used to cut a path back to the main group. Alternatively, you could go around and meet up with them on the other side. A third option is to go around and rush the boss, but this is not advisable, as it will begin a time limit and make getting all the chests harder.

Due to the high concentration of enemy units toward the center of the map, drawing them out with your tankier characters is advisable. From there, ranged attackers can be used to pick off dangerous threats, and the enemy archers can be dealt with by using your melee units.