You may be looking for the Revelation route of Fire Emblem Fates. 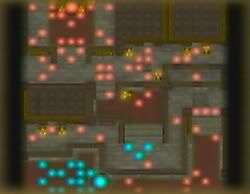 Prince Kurthnaga tells of the connection between Daein and the dragon tribes. Ranulf reveals the identity of the Black Knight. These revelations send Ike's mind spinning in a whirlpool of confusion and doubt. Ike becomes convinced that the answers to all of his questions lie within the Tower of Guidance, and he is determined to reach the tower at any cost. His group arrives in the duchy of Tanas, near the imperial capital. Caught in a sudden downpour, they take shelter in the duke's deserted villa.

Revelations is Chapter 4-4 of Fire Emblem: Radiant Dawn. The player takes charge of Ike's team in this chapter. Tormod, Muarim and Vika will rejoin the player's army in this chapter. Oliver is the boss, but can be recruited by having Rafiel wait in range of Oliver (Oliver does not move otherwise). Note that once Oliver talks with Rafiel, enemies will immediately begin attacking him, so it may be prudent to eliminate enemies within his range before triggering this event.

• You can recruit the boss if Rafiel talks to him.