-
[view]
The Revenant (ゾンビ Zonbie, lit. Zombie in the Japanese versions) is an enemy-only Monster class that is first introduced in Fire Emblem Gaiden. Taking the form of reanimated cadavers, Revenants commonly use their decayed claws and talons to rend the flesh of their foes.

In their original inception in Gaiden, Zombies use their claws to strike their foes. They are not considered to be particularly threatening enemies due to their frail Strength and fragile defenses.

In TearRing Saga: Utna Heroes Saga, Zombies use their fists to pummel their foes. These fist weapons are classified as Axes in the game.

In The Sacred Stones, Revenants are amongst the few enemy classes which use weapons that boast infinite durability. This is because the creature uses its claws to attack; while most Revenants employ the Rotten Claw for attacks, there are some who wield the much stronger Fetid Claw or, very rarely, the Lethal Talon, which can poison upon each successful strike.

In Awakening, Revenants are part of the Risen. Like their The Sacred Stones counterpart, Revenants in this title use their claws to attack their foes.

One Revenant makes a cameo appearance in Tokyo Mirage Sessions ♯FE as the main monster in “Horror Hunter Angel”, which Eleonora Yumizuru stars in.

Revenants make a cameo appearance in Fire Emblem Heroes in Heroes Journey, appearing in the Life and Limb memento event. They use their design from Echoes: Shadows of Valentia.

In actual combat situations, Revenants are somewhat ineffective. Like most other monster classes, the Revenant class has a few fundamental weaknesses that make it less effective as a fighter, such as weak defenses, alongside a vulnerability to those armed with the Slayer skill. Monsters therefore make up for this problem by simply coming at the player in larger numbers than other enemies do.

Revenants have rather low Skill and Speed, and so their attacks always have a high chance of missing. They do not fare very well in other statistical departments, which are generally low to average. Coupled with low Defense and Resistance, Revenants are easy to kill, but their generally high HP balances it out. They also usually come into combat at a relatively low level, further decreasing their combat effectiveness.

The Revenants resemble walking corpses. They walk slowly while hunched forward and a few scraps of clothing hang from their decaying bodies. They have deadly sharp claw-like hands that they use to attack their enemies with. In Gaiden and Awakening, they attack after seemingly melting into the ground, and re-emerging above ground.

Concept artwork of the Revenant class from Awakening.

Concept artwork of the Revenant class from Echoes: Shadows of Valentia. 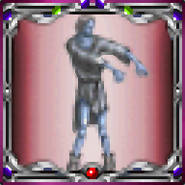 Generic class portrait of the Zombie class from TearRing Saga.

Generic class portrait of the Revenant class from The Sacred Stones.

Generic class portrait of a Revenant from Awakening. 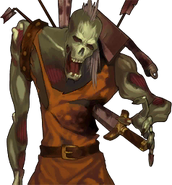 Generic class portrait of a Revenant from Echoes: Shadows of Valentia.

Village sprite of a Revenant from Echoes: Shadows of Valentia.

Battle model of the Zombie class from Gaiden.

Battle model of the Zombie class from TearRing Saga.

Attack animation of the Revenant class from The Sacred Stones.

Battle model of the Revenant class from Echoes. 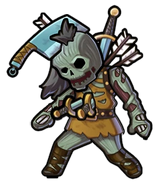 Sprite of the Revenant from Heroes.

Map sprite of the Zombie class from Gaiden.

Map sprite of the Zombie class from TearRing Saga.

Map sprite of the Revenant class from The Sacred Stones.

Map sprite of the Revenant class from Awakening. 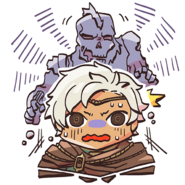