Rexcalibur (レクスカリバー Rekusu karibā, also known as Fimbulvetr in the French version of the games) is the most potent wind tome in Path of Radiance and Radiant Dawn. When cast, this tome will cause enormous ice shards to encase the selected target, before shattering in a flurry of whirlwinds.

'Rexcalibur' is a portmanteau of the words 'rex,' which means 'king' in Latin, and Excalibur, King Arthur's legendary sword.

Latin for 'King,' rex is used to denote a particularly powerful incarnation of something. In this case, the term is used to describe the devastating power that the winds wield.

A casting of Rexcalibur in Path of Radiance. 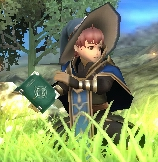 Ricken wielding the tome of Rexcalibur in Awakening.

Ricken casting Rexcalibur on an enemy Sniper in Awakening.

In-game model of the Rexcalibur tome from Heroes.