Frank Todaro
[view]
“Mercy will be done when you and your fellows are gone from this world.”
—Reyson to Valtome in Radiant Dawn

Reyson is a playable character from the Tellius Series. The third prince of the fallen kingdom of Serenes, and one of the few Herons who survived the Serenes Massacre, Reyson is the brother of Rafiel, Leanne and the deceased Lillia, and the son of the ailing Heron King Lorazieh.

The third prince of the fallen kingdom of Serenes, he and his father King Lorazieh were rescued by King Tibarn of Phoenicis during the outbreak of the Serenes Massacre, when they were on the verge of death. Since then, Reyson has been residing in Phoenicis with his bedridden father for twenty years, after the destruction caused by Begnion.

Reyson makes his first appearance in this game after the events of Chapter 14, where he attends the assembly of the Laguz kings with Tibarn. When questioned to share his thoughts on Tibarn's acts of piracy on Begnion, he heatedly responds with the utmost abhorrence, as he expresses a desire to exact revenge on them for desecrating Serenes Forest and its inhabitants. Reyson then holds his silence as Dheginsea lectures him on vengeance being able to spark off a chain reaction of endless hatred.

Before the start of the preceding chapter, Reyson pays a visit to Naesala in Kilvas in order to demand an explanation for his recent spate of hostility towards Tibarn. Choosing to evade his questions, Naesala then attempts to appeal to his conscience by reminding him that it was him, and not Tibarn, who had watched over Reyson and Leanne in their adolescence and after the fire. After the events of the chapter reach their conclusion, Reyson is led to the area that was once the Serenes Forest by Naesala, where he expresses shock and distress over its ghastly state. Sensing that he has successfully broken through the prince's strong willpower, Naesala then seizes the opportunity to convince him into resting for the night in Duke Tanas's mansion, which is conveniently located nearby.

Reyson is greeted by Duke Tanas the following morning, where he learns, to his immense horror, that he has been sold to the duke by Naesala. Boiling with rage at Naesala's act of treachery, he then delivers a punch to Duke Tanas's nose. At the end of this chapter, Reyson escapes from the room he is held captive in, bumping into Ike by accident. Ike then offers assistance to him, to which he angrily rejects before rushing out of the mansion into the cover of Serenes Forest.

Reyson next appears in the second part of Chapter 17, where he vows to activate a certain forbidden magic to "destroy the humans utterly". He is joined by Tibarn, Janaff and Ulki in the fourth part of this chapter, where he is talked out of singing the "dirge of ruin". Reyson then spots Ike carrying someone familiar on his back, and follows his companions' lead into taking a closer look. In the resolution of this chapter, Reyson realizes that his juncture is correct, as he reunites with his long-lost sister. Apostle Sanaki later arrives in their presence, where she kneels at their feet and begs their forgiveness for her people's actions. On Leanne's urging, Reyson decides to forgive Begnion, thereafter singing the Galdr of Rebirth with Leanne to restore Serenes Forest to its former glory.

Reyson later meets Naesala in Chapter 19, where he decides to forgive him for his actions, as Naesala's actions indirectly led to the discovery and subsequent rescue of Leanne. Naesala then promptly leaves the battlefield with his troop of Ravens.

If Reyson is either not recruited or has fallen in battle, he will then visit Palmeni Temple in Chapter 22, where he discovers the room where Lillia was held captive in by Daein forces. Absolved by grief, he then convinces Ike to allow him to accompany his forces into Daein to uncover the truth behind his sister's death.

Reyson then receives news of Leanne having been kidnapped by the Black Knight in Chapter 25, and is once again reunited with her in Chapter 28, where it is revealed that Naesala has rescued her from Gritnea Tower as an act of repentance for his crimes.

After the final showdown with the Mad King Ashnard ends, it is revealed that his steed is, in actuality, a Black Dragon Laguz, Rajaion. Together with Leanne, he will then sing the Galdr of Rebirth to Rajaion, granting him some reprieve with his wife Ena in his final moments.

Accepting the invitation of King Caineghis, Reyson will then follow Lethe and Mordecai to Gallia with Leanne and Lorazieh.

After the end of the Mad King’s War, he went back to Phoenicis to live peacefully by his bedridden father’s side. However, he finds himself fighting alongside Ike and the Greil Mercenaries once again for the sake of his people after Phoenicis joins the Laguz Alliance in a war against the Begnion Senate.

Reyson makes his return in Chapter 3-3, where he expresses concern for Tibarn's safety after learning of Naesala's betrayal of the Laguz Alliance. He later re-appears in Chapter 3-5, where he convinces Ike into allowing him to join the Greil Mercenaries in the preceding battles.

As the Laguz Alliance later flees towards the safe confines of Gallia, they pass through the Kauku Caves in Chapter 3-8, and are stalled from further progress by Dheginsea when they accidentally trespass into the lands of Goldoa. He later grants them safe passage through his country begrudgingly when he spots Reyson in their midst, as the latter has done him an enormous favor by saving Rajaion's soul in Path of Radiance.

During the events of Chapter 3-F, Reyson collapses as the chaotic energies of Lehran's Medallion become increasingly uncontrollable. He later awakens after Yune awakens from her slumber within the medallion, and is assigned to accompany Tibarn's group on the path to the Tower of Guidance.

After the battle in Chapter 4-5 concludes, Reyson sings a dirge to appease the tormented souls of the Feral Ones, enveloping the immediate surroundings in a faint white glow. Later, on Elincia's plea, he sings the Galdr of Rebirth for Renning, whose soul has been corrupted by Izuka's Feral Drug. Upon carrying out this feat on his own, Reyson will fall "asleep with a big, contented smile on his face".

After Ashera is finally defeated, a new Laguz nation will be born, with Reyson being appointed a leader in its political arena.

After being rescued by the Hawks from the Serenes Massacre, Reyson developed more aggressive, fiery personality traits considered unbecoming of a heron, much to the chagrin of those around him. He ate meat though it made him sick, trying to develop a more hearty constitution like the hawks who rescued him, and broke all the bones in his hand punching Oliver. He is more inclined to violence than other herons, despite negative emotions still having a detrimental effect on him.

As a result of the Begnion citizenry being directly responsible for the Serenes Massacre, he thus bore an antipathy for the Beorc race who slaughtered his compatriots, to the point where he was willing to sing a Galdr of Destruction. However, after reuniting with his sister Leanne, long thought to be dead, and interacting with Ike and the others, his intense feelings gradually changed. So much so that before the final battle, he shared his determination to defeat Ashnard with Ike.

Reyson has expressed a desire to be more like Tibarn, whom he describes to possess a "big body" and "strong wings". This has led to him going so far as to attempt to consume Hawk food, a decision that almost caused him to pay dearly with his life.

Reyson has one purpose: to revitalize your units and allow them to move more than once on the same turn. Unlike most other laguz, who focus on offense, Reyson cannot attack at all; rather, his transformation strengthens the power of his refreshing. Ordinarily, he refreshes one unit, but when transformed, he refreshes all units surrounding him. When combined with Reyson's own flight capabilities and high Movement while transformed, and the ability of mounted units to move again after attacking, it is none too difficult to use Reyson to refresh multiple characters every turn. This means that, rather than a combat unit, Reyson is more of a force multiplier, as he allows existing units to accomplish far more than they otherwise would. He enables highly diverse and complex strategies, allowing units to cover a great deal of ground and fulfill functions they otherwise would not be able to. Reyson is a great candidate to carry the Knight Ring, gifted to him in Chapter 19, as it allows him to be far more flexible in where he goes.

Reyson's main weaknesses are twofold: first, he is extremely frail physically, and while he does have fairly high Avoid due to excellent Speed and Luck, he should be kept out of enemy range whenever possible. The second is that Reyson only reaches his full power when transformed, which, without spending his turn using a Laguz Stone, he can only manage after five turns of waiting. Even an untransformed Reyson can still help the army quite significantly, but he will need either waiting or a spent turn to truly excel, and may even lag behind otherwise. Nonetheless, Reyson makes by far the best use of Laguz Stones, and the cost of keeping him protected and fueled tends to more than pay for itself.

Reyson's usefulness as a unit in this game is more prominent, as his good movement range allows him to reach far-off allies with ease, alongside being able to sing a wide variety of Galdr with differing effects. However, depending on whether he's transformed or not, he's quite inconsistent: when un-transformed, his Galdr only affect one unit compared to Leanne's two and Raphiel's four, but he has the same healing abilities as Rafiel and the best movement of all herons when transformed. Like all herons, he's frail and must be kept away from danger.

(Chapter 21 and before)
Reyson: ...Urgh... I am sorry. This wound prevents me from repaying my debt. ...I shall return to Phoenicis. Janaff, [if Janaff can fight] Ulki, [if Ulki can fight] you must aid them where I cannot.

(After Chapter 22)
Reyson: Urgh! I will not be defeated here... I must...for Lilia's sake!
Ike: Reyson! I understand how you feel, but you cannot go on! You must withdraw!
Reyson: I am no longer fighting for my family alone. I wish to help you and your sister.
Ike: For someone who knows nothing of fighting, you've done more than enough already. I... I've no wish to rob Leanne of her brother. Please...for me.
Reyson: I understand... Ike, you must be careful. I would not want see you die.

(Final Chapter)
Reyson: Urrgh... So close... I've come so close! I cannot withdraw now!
Ike: You have to stop, Reyson! I promise you, I will see your wish fulfilled. Please, believe me.
Reyson: ... Forgive me. There's no need for you to shoulder my personal burdens. Fight for your own reasons.
Ike: They're the same, aren't they? All of us here, we're fighting for the same thing, and we will win!

Reyson worked hard as leader in the new laguz nation. His iron resolve under a pretty face was suited for politics.

Reyson is illustrated in the trading card game Fire Emblem Cipher with the following cards: 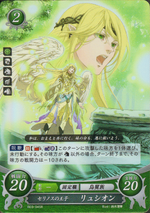 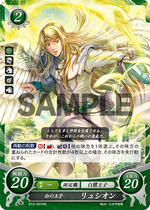 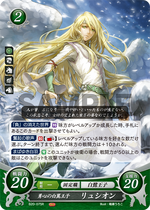