Start a Wiki
watch 01:04
Who Rhajat?
Do you like this video?

Paralogue 14: After the End

Stephanie Sheh
[view]
“I owe you my life. All of it. Every hour, every day, until the end. You've got my full attention. I'll watch you like a hawk on a mouse. Forever and ever—until one of us is no more. And maybe then some.”
—Rhajat to Corrin after they rescue her at the end of her Paralogue.

Rhajat is a playable character in Fire Emblem Fates.

Rhajat is the daughter of Hayato. She has the darkest thoughts in the army.

In her Paralogue, Rhajat finally succeeded in learning to summon Faceless soldiers. Unfortunately, this occurred during a visit by Hayato and the army. Quickly moving in to defeat her Faceless, her Faceless are quickly dispatched by the army. Hayato can talk with her during the battle. If he does, he will tell her to stop summoning Faceless and she will comply with it. After the battle, Hayato is upset that she decided to go for the more advanced dark arts (summoning Faceless) and orders her to go with him so he can supervise her magical training. As she knows she cannot object to her father's decision, she goes along with him, provided that he can give her challenges.

Before leaving, Rhajat decides to have one final look at her house when a Faceless that survived the battle ambushes her. Corrin kills the Faceless before it can attack her. Rhajat thanks Corrin for protecting her and vows to help them no matter what, albeit in an obsessive manner. Should Corrin be her mother, a slightly different event occurs. Rhajat apologizes to her for letting her spell go out of her control, but Corrin forgives her, relieved that she is ultimately unharmed. Rhajat is touched by her mother's kindness, but states that her affections for her transcend their familial bonds. While Corrin does not understand it, Rhajat pledges to be there for her mother and is happy to leave the realm in order to be close to her.

Rhajat is a loner, preferring to stay away from others, especially those who she has no interest in. Her non-sibling supports with Shigure indicate that she used to suffer serious power incontinences when she was younger, leading her to be feared and to isolate herself from other people in fear of hurting them and being rejected. She dabbles in darker pursuits that appear dubious in nature, but most of her endeavors have the best of intentions for someone else.

Rhajat has a particular obsession with Corrin after they saved her from a Faceless ambush at the end of her paralogue. She also tells them that it started when she was young and energetic, as she almost fell off a cliff if not for Corrin who saved her and she changed her personality after that incident.

Her relationship with her father comes off initially as cold and condescending because she is technically older than he is, however, it is revealed that her cold personality is a means to mask her loneliness due to being raised in the Deeprealms by herself. When Hayato insists on bonding with her no matter what, she actually breaks down crying. This shows that even though she is older than Hayato is, she nevertheless cares a great deal about him.

Rhajat also cares a great deal about her mother, wanting said mother to trust her despite the opinions of others, such as the villagers in their supports. They also reveal that she's quite single-minded in her non-Corrin pursuits, like when she completely focuses on finding a cure to an illness despite being mistaken as the source of said sickness in the first place.

Description: Hayato's daughter. Tends toward the obsessive and has a horrifying temper.

*Rhajat will receive whatever secondary class that Corrin has access to if she has achieved an S-Support with them.

Rhajat inherits Hayato's decent stat spread with a modest Magic and Speed modifier to give her a solid performance as a Diviner. Her Magic potency varies either having extremely high potential with mothers like Felicia, Orochi, and Nyx's +5 or neutral changes from Hinoka and Oboro. Her speed is the same, seeing as high as a +6 modifier from Azura and Setsuna or at her neutral base of +1 with Orochi. For the most part, she is likely to launch powerful attacks and can kill most enemies in a single round of combat. Her main downsides are her low Skill and Defense modifiers, making it hard for her to hit her opponent and if she in turn is hit physically, she can suffer greatly. In the end, she is a very glass-cannon like mage with certain mothers, dishing out great damage while suffering the same if she is hit herself. Her Personal Skill, Vendetta, allows her to be a very dangerous unit to engage and leave alive as she deals 4 more damage whenever she reinitiates combat with a unit she had previously encountered on that map.

As a Diviner, she starts of with Magic +2 which falls off quickly with her strong Magic growths and Future Sight to boost her EXP gains when training. Her two promotion options have two different results which have good applications depending on her mother. Onmyoji brings her magic to its fullest potential as its pure emphasis on Magic damage along with the ability to heal makes her a very potent magic unit. Rally Magic can assist allies by boosting her magic while Tomefaire adds a guaranteed +5 damage to her Tome based attacks. Overall, for most magic potent Rhajat, this is the class to go with with mothers with strong Magic modifiers for her. Basara introduces the ability to use Lances and Naginatas. For mothers who give her decent Strength modifiers, like Kagero and Effie, this class is worth using to exploit her ability to deal both physical and magical damage. She learns Rend Heaven, to boost he damage based on her enemy's Strength or Magic stat, depending on the weapon, and Quixotic which, while it gives the benefits to her enemies as well as herself, she gets the needed boost to her Hit Rate and Skill activation rates that is a result of her low Skill growths.

As Rhajat's base class is the same as her father Hayato's, she will inherit his Oni Savage class set.

From the Oni Savage class, Rhajat can learn Shove to push allies out of the way and allow her to finish off the opponent if the ally in question did not kill them. Seal Resistance compliments her high magic stat to allow her to deal more damage onto enemies with magic. The promotions in this class set are the Oni Chieftain and Blacksmith classes.

As an Oni Chieftain, Rhajat can also use axes, though her initially low strength can hamper her from using them efficiently. Fortunately, this class is able to use magic, so she can fit well in this class. She will get increased durability and physical defense, but her skill will drop considerably due to this class' low skill growth and cap. In this class, she can learn Death Blow to deal more critical hits, and Counter to punish opponents that try to attack her in melee range. Sadly, the low Skill of the Oni Chieftain will underscore her difficulty with accuracy; however, this can be decently remedied by equipping skills like Certain Blow and Quixotic.

As a Blacksmith, Rhajat can use swords and axes. However, she may have trouble in this class unless given a Bolt Axe/Levin Sword, due to her initially low strength stat. In this class, she can learn Salvage Blow, though the nature of this skill makes it relatively useless for her. Lancebreaker makes her an effective lance killer, increasing her accuracy and evasion against them.

Rhajat has 4 friendship options: Selkie, Mitama, Caeldori and Ophelia. Note that her supports with Ophelia are only available in Revelation.

Black Magician
Hayato's daughter. Tends toward the obsessive and has a horrifying temper. Appears in Fire Emblem Fates.

Rhajat is a Green Mage highlighted by her solid Atk and Spd stats. This puts her in competition with Nino with some small redistribution of stats, but ultimately yielding similar results. While makes her a viable option for an offensive green mage, this also means that she is an inferior option simply due to the easier access to Nino, especially for merges. Nevertheless, Rhajat’s inherent advantages does give her a starting niche that is wholly separate from Nino while being able to function like her with easier inheritance.

Keen Gronnwolf is Rhajat’s weapon which deals effective damage to Cavalry units. She is the only inherent user of the tome and thus requires less Refinery stones to not only have the stronger form of Gronnwolf, but also give it a refine to negate the visible buffs on any cavalry unit she combats. While not the most defensive unit, this refine and one of her base skills makes her an excellent check for mage cavalry units, especially the likes of Reinhardt as well as most blue and green cavalry units.

Distant Defense gives her additional Def/Res when attacked by a ranged unit, giving her a little bit of bulk to bait out cavalry mages. Rally Atk/Def boosts the Atk/Def of an ally by 3, which is a stronger, better scoring Support Skill for Arena scoring, while giving visible buffs for such teams. Whenever Rhajat initiates battle on an enemy, Savage Blow inflicts 7 damage to enemies within two spaces of her target, giving her decent splash damage.

Rhajat’s low bulk in both damage types leaves very little room for her to actually take many hits, even with Distant Defense applied. Red units check her easily. Whether they are speedy red units like Ayra and Owain who simply run through her with sheer speed and might, Distant Counter users like Ryoma and Zelgius who can soak a hit and retaliate back, or Red Mages like Tharja or Lilina who can nuke her with magic, she fares poorly against the color disadvantage. Brave Bow/Firesweep Bow users similarly can kill her through a quick follow-up attack or completely uncontested attacks respectively

Rhajat already has a niche as a cavalry counter as mentioned above. She can further check mage cavalry units if she takes a Distant Defense Seal to give her a massive 12 Def/Res boost when attacked. Alternatively, Fury is available to give her a flat 3 point boost to her four main stats at all times while having a 9 Def/Res increase when initiated upon by ranged units. The small recoil after combat helps put her into the damage range of Vantage, which gives her attacking priority when initiated upon while under 75% health. Draw Back is a universally good Support Skill for mage units to pull allies out of danger. Moonbow is a fast charging special that ignores 30% of enemy Res when she activates it.

She can inherit a Gronnblade tome, functionally becoming like Nino. Draw Back and Moonbow are still useful as mentioned above, though the latter can be replaced with Glimmer as she is taking buffs to enhance her damage from her tome. Fury is generally maintained due to its easy access, though Attack Speed Solo gives her power in both stats when isolated from allies. Desperation guarantees an immediate follow-up attack when under 75% health, especially given her solid Spd. Finally, any sort of Skill C skill can be inherited for whatever purposes is needed for her team, though either Attack Wave Skill gives her a self-buff to fuel her tome.

Rhajat is illustrated in the trading card game Fire Emblem Cipher with the following cards: 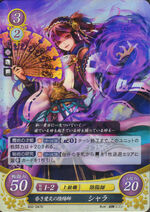 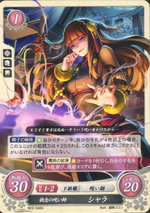 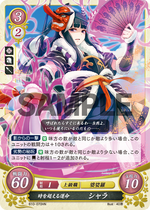 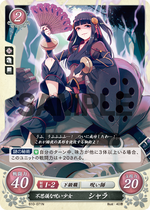 Rhajat is an anagram of Tharja, the basis for her character. "Rajat" is a Hindi word that means "silver".