Rhomphaia (ロムファイア Romufaia) is a lance that debuts in Fire Emblem Echoes: Shadows of Valentia. It has the ability to deal effective damage against armored and horseback units, and deal extra damage depending on the user's speed stat.

The Rhomphaia (ῥομφαία) was a poled weapon used by the Thracians of Ancient Greece. 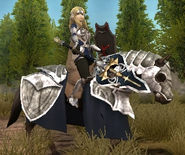