[view]
“Oh, sorry... That probably sounds weird. I've always been sickly. When I was little, I spent a lot of time in bed. So... I used to gaze out the window and see all the little birds flying around the sky... It must be fantastic! Flying wherever you want, whenever you want?!”
—Rhys talking to Ulki in a support conversation

Originally just a civilian who used to live a life of healing the sick in a village, he came across Titania –who was severely wounded during a mission. After nursing her back to health, he ended up joining the Greil Mercenaries.

Due to his frail conditon, he often is left to care for the mercenary fort alongside the younger members Rolf and Mist. However, he is still a valuable asset to the team who continues to support them from the sidelines, as skillful staff-users like him are scarce yet necessary among the mercenaries. Prior to joining the mercenaries, he stayed at home with his parents and was unable to find work due to his weak constitution.

In a Support Conversation with Mia in Path of Radiance, Rhys reveals that he has always wanted to be a swordfighter but isn't strong enough. Mia, sympathizing with Rhys, vows to help him strive for this dream of his while convinced that he will become her ultimate rival due to a fortune reading she got earlier. Unfortunately enough, after a few training sessions, Rhys is observed to be unable to cope with the strict training, whereupon he falls terribly ill, resulting in the pair being forced to abandon their plan.

Rhys's role as the only early-game healer is a difficult one to oversell. There aren't even any other options until Mist joins in chapter 9. Even when this happens, some players might elect to use Rhys anyway, at least for a period of time, due to Mist's poor base stats and staff rank. Once Mist begins to catch up in levels, promoting and gaining a mount in the process, Rhys begins to fall off. However, even in mid- and late-game, he may still find a niche in using status staves that Mist may not have the rank for yet.

Like most healers in Fire Emblem, Rhys is not a combat unit. While he does technically gain light upon promoting, this rarely does much for him, and there's even a good chance that the player won't promote Rhys at all unless a master seal is used on him. He should never see front-line use due to his low speed and bulk. He can hold his own against magical enemies due to his high res, but there's really no reason for him to confront them in the first place.

Rhys will become playable as a 2nd Tier Bishop Class, and once he is promoted, he can potentially be one of three possible Saint class characters the player may obtain. Although there are several characters in Radiant Dawn who can utilise Light Magic, Rhys is still valuable as both a healer and a Light user. In both bases and growths, he excels in Magic, Resistance, and Luck.

Rhys is illustrated in the trading card game Fire Emblem Cipher with the following cards: 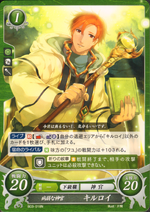 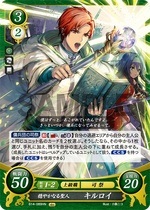 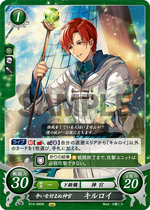 Rhys as a Priest in Fire Emblem 0 (Cipher).

Rhys as a Bishop in Fire Emblem 0 (Cipher).

Rhys as a Priest in Fire Emblem 0 (Cipher).

Rhys' portrait in Path of Radiance.

Rhys' battle model as a Priest in Path of Radiance.

Rhys' battle model as a Bishop in Path of Radiance. 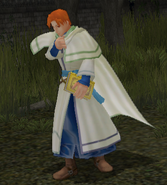 Rhys' battle model as a Bishop in Radiant Dawn.