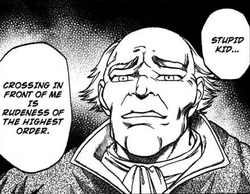 N/A (most likely Archer)
[view]
“Bwahahaha! You call me who received the power of the King, a "villain"?”
—Richten

Richten is an enemy character in Chapter 1 in Fire Emblem: Hasha no Tsurugi. He is a cruel ruler of the Town of Alta. He appeared with the Iron Dragon Knights and attempted use his bow on a little girl for behaving rude in front of him, but she was saved by Al. He captured Al and forced Gant to fight Al in a duel, tricking Gant into believing that Tiena was there. Gant found out about the princess and was going to kill Richten. He attempted to use a War Dragon to kill Gant. He was wounded by Al and killed by his castle getting destroyed by the War Dragon he summoned.

Retrieved from "https://fireemblem.fandom.com/wiki/Richten?oldid=472492"
Community content is available under CC-BY-SA unless otherwise noted.