Chapter 6: Fire Emblem (Shadow Dragon and the Blade of Light)

Chapter 5: Liberation of Grust (Mystery of the Emblem)

Ikura Kazue
[view]
“Funny story: I decided to break in here and clean the place out- and then I got caught. Hilarious, right? Comedy gold.”
—Rickard in Shadow Dragon.

Rickard is a thief who appears in Fire Emblem: Shadow Dragon and the Blade of Light, Fire Emblem: Mystery of the Emblem, Fire Emblem: Archanea Saga and the remakes to those games. Rickard is a very skilled and optimistic thief, who holds a strong affection for Julian (to the point that he ends his sentences to Julian with heart symbols, and Julian states he will give people the wrong impression in the second book). He often addresses Julian as 'Chief' (or as his 'Big Bro' in the Japanese version).

Rickard is a second recruitable thief in this game, but has lower stats in HP, Skill, Luck, & Defense than Julian does. Considering Julian joins earlier than Rickard with better growth rates, his usefulness downgrades him to picking locks in the shadows. However, he should not be ignored entirely. He can serve as a replacement to Julian if he died after Chapter 6. He still has passable growths, but his low HP and Defense can make him rather fragile. It is a plausibility to give him a Seraph Robe, Secret Book, and Dracoshield, but that could mean putting in a little bit more effort to train him than others, and generally using stat enhancers as a remedy for low stats is unadvisable. If putting in more effort is undesirable, it would be wise just to use Julian. Overall, he is passable, but passing him on for Julian is highly considerable.

Chapter 5: Talk to him with Julian.

Rickard returned home to live in peace- or so he claimed, even as the area experienced a surge in break-ins and purse-snatchings.

"After the war, Rickard returned to thievery yet again."

“Has anyone seen my big bro Julian?”
—Rickard's opening lines in battle in Mystery of the Emblem Book 1 and Book 2

“...Wow! Really?! A prince, you say? Thanks for springin' me! I'm Rickard. Just a small-time thief, mind you, but I've got big aspirations! I broke in here to clean the place out, and instead it was me that got my clock cleaned... Since you saved my hide, I guess the least I can do is lend you my services in return.”
—Recruit conversation with Marth

Julian recruit
Julian: What the- Rickard? What are you doin' in here?
Rickard: Oh, uh...hey there, Chief! Been a long time, huh? So, funny story: I decided to break in here and clean the place out- and then I got caught. Hilarious, right? Comedy gold. Ok, your turn. What are YOU doin' here?
Julian: Me? I've washed my hands of thievery and joined the forces of justice.
Rickard: Ohhh really? Justice? So then this wouldn't have nothin' to do with some new lady friend? You always did have a soft spot for a pretty face and right features-
Julian: Wha- Can it, you little fink! I said it's about justice! I'm entitled to have a moral crisis now and then! ... You know what? Just for that, YOU are gonna work for me, startin' right now.
Rickard: What ? Do I have to...? Well, all right. You dive a hard bargain, but what can I say? I missed ya, Chief. Just make sure I get a cut of the haul!

Julian: Hey, Rickard! I see you haven't tired of stealin'.
Rickard: Ah! Chief! How nice to see ya. Well, I was plannin' on workin' with you and makin' loadsa money, but you had to go and quit the business! Fallin' head over heels for that beautiful cleric, and then dumpin' me... That's just too cruel! Did our love really mean that little to you?
Julian: Can it, you little fink!! People'll get the wrong idea about us, if you keep talkin' like that. Anyway, forget about thievin' and come with me to fight for justice.
Rickard: Hmm... alright then! I'll follow you anywhere. I do adore ya, Chief!

Rickard is illustrated in the trading card game Fire Emblem Cipher with the following cards: 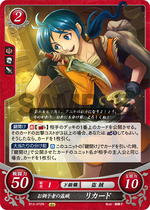