Bow Knight
[view]
Riegan is a character from Fire Emblem: Three Houses. He was one of the Ten Elites who fought in the War of Heroes, and the original bearer of the Crest of Riegan.

During the War of Heroes, Riegan was one of the Ten Elites who fought alongside Nemesis against the forces of Seiros, the Four Saints, and the Adrestian Empire. Riegan bore the Crest of Riegan, a blessing from the Goddess, and wielded the legendary Failnaught. After the war, Riegan founded House Riegan in the eastern region of Leicester. His descendants eventually intermarried with the progeny of King Loog after the formation of the Holy Kingdom of Faerghus.

After Seiros prevailed over Nemesis and the Adrestian Empire completed its conquest of Fódlan, she pursued and killed Riegan and took custody of Failnaught. Subsequently, the Church of Seiros revised history to write Riegan and the Elites as heroes who worked to create modern Fódlan alongside Nemesis, but became corrupt and had to be struck down. Riegan's descendants became nobility of the Empire and later, the Leicester Alliance, passing down his Crest through the centuries. 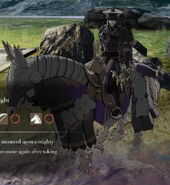 Battle model of Riegan as a Bow Knight.