Rigel (リゲル帝国 Rigeru Teikoku lit. Rigel Empire) is a kingdom located in the northern part of Valentia. Its people worship the War Father, Duma, and as a result, Rigel is a nation heavily reliant on strength. They are considered "savages" by the people of Zofia. The Duma Tower was built towards the north of the Kingdom. During the events of Fire Emblem Gaiden, the kingdom is ruled by King Rudolf. Rudolf first used the Falchion to seal Mila, and then helped Desaix take over and control Zofia.

In the year 189 of the Valentian Calendar, the Rigelian Empire was established in the northern region of the continent. It was ruled by Duma. In the year 374, Rudolf was appointed as the successor of the Rigelian Emperor Rigel III. Despite being an indirect relative of the Emperor, Rudolf was chosen due to his ability to wield the Falchion, in addition to the fact that he bore the brand of Duma, which gave him priority placement in the line for the throne. He ascended as Emperor Rudolf I.

In the year 398, poor harvests caused the food-stocks of the Rigelian Empire to run dry. Despite Zofia's bounty, Rigel's request for assistance was met with rejection, leading Rigel to start a war against Zofia. Rudolf himself led the troops during the invasion. A year later, despite the army's repeated successes in the war, the upper echelon of the Rigelian Army negotiated a ceasefire in exchange for a large compensatory sum of gold. Afterwards, the Rigelian Army remained garrisoned in Northern Zofia. Despite the ceasefire, Rigelian occupation caused the Zofian people to harbor resentment towards Rigel.

After the revolution in Zofia, Rigel fights against Alm's army. After the death of Rudolf, Alm unifies Rigel and its former rival Zofia as one country, becoming the first king of Valentia. 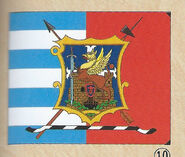