Dorothy Fahn
[view]
“Er, that is to say, I love to dance. In...most circumstances. There is a little grove behind my manor. Inside is a flower garden where small birds gather—it is a place dear to me.”
—Rinea, to Berkut

Rinea is a non-playable character who appears exclusively in Fire Emblem Echoes: Shadows of Valentia.

Rinea is a noblewoman from an impoverished Rigelian house and is engaged to Berkut. Even within the Empire, she is renowned for her beauty, and is the one person whom Berkut trusts without reserve. Rinea met Berkut at a royal ball. Despite the lesser nature of her noble house, Berkut was charmed by her beauty and offered to dance with her, thus beginning their romance.

During the events of Shadows of Valentia, Rinea is first introduced when Alm's forces storm Zofia Castle where Berkut was stationed. Rinea showed no interest in the battle as she detested violence. Berkut was content to sitting back and watching the battle unfold with her at his side.

After Alm kills Emperor Rudolf, it is revealed that Alm is Rudolf's true son, thus rendering Berkut's right to the throne invalid. In his frustration, Berkut enters the Duma Tower where he pleads to Duma for more power. Worried for Berkut, Rinea follows him into the Tower and tells Berkut that she does not care whether or not he is emperor, never desiring herself to be empress from the beginning, only to remain next to him for the rest of her days. Berkut takes this as a slight and drives him over the edge, offering Rinea's life as payment for power from Duma. Rinea's soul departs from her body and is engulfed in flames as Berkut holds her lifeless body. In pain from being forcefully transformed into a Witch and forced to obey Berkut, Rinea attacks Fernand, mortally wounding him. Shortly after, Alm's forces encounter Berkut and Rinea where the two forces clash and end with Rinea and Berkut both defeated. As Berkut is on his death throes, Rinea's spirit, now free from Duma's influence, beckons for Berkut to join her in the afterlife where they can search for their "empire" together, so long as Berkut is content with having Rinea as his "empress." Berkut accepts her offer and departs alongside her into the afterlife.
"End of spoilers. It's a pleasure doing business with you!"

While uncomfortable around most strangers, Rinea still tries to put up a pleasant and polite front. She seems to feel a lot of pressure to be an "acceptable" fiancee to Berkut, even though she dislikes public life. She often frets a lot about her choice of words and being what is considered appropriate in her department.

Being the daughter of a minor Rigelian noble family that is not well-off, financially or in social standing, her discomfort with court life is exacerbated. She does, however, love to dance, and also enjoys nature and being outdoors. While typically fairly soft-spoken, if Rinea has an opportunity to talk about something she likes, she will become much more animated and verbose, a trait she is rather ashamed of. The whole ordeal of war is as uncomfortable and alien to her as court life, but she sticks it out to stay by Berkut's side. He's the only person she opens up to, and conversely, Rinea is the only person Berkut opens up to.

Reminiscent Belle
Berkut's betrothed. Typically on the reserved side, she loves to dance. She moves to the beat of any music playing in earshot. Appears in Fire Emblem Echoes: Shadows of Valentia.

Soiree Rinea is a Tempest Trial Blue Tome Infantry unit that has the powerful utility of being a Dancer unit. As a standalone unit, her offensive stats are decent for a dancer with base 30 Atk and 33 Spd and her bulk is just enough to take a hit when needed, but nothing particularly spectacular. Her main downsides pertain to her Dancer status as she cannot obtain IVs to better distribute her stats and that there are many powerful dancers such as Legendary Azura, Peony, and Summer Festival Micaiah. While she shares this type combination with Performing Arts Shigure as well, overall, Soiree Rinea is an excellent budget dancer. Her Silver Goblet has a Distant Guard 3 effect, granting a bonus +4 Def/Res when they are attacked by a ranged unit and is within two spaces of Rinea. On top of the effect, the weapon stat forged to give her additional points to one of her stats, giving the player one method to better manipulate her stats in a meaningful way. As a dancer, she had Dance for her assist skill. Bracing Blow increases her Def/Res by 4 when initiating combat. and Fireflood Dance increases the Atk/Res of the ally she dances for by 3/4 respectively

Soiree Rinea's middling stats mostly results in mediocre damage dealt and received. Units with high bulk can easily absorb her attacks while high offense units can not only double on her, but also penetrate through her passing bulk. Both her HP and Def are low enough that both Mila and Bridal Fjorm can inflict the【Isolation】effect on her.

Keeping her in her core Dancer build is advisable as the utility alone makes her an acceptable unit. Moonbow is a fast charging special that helps boost her damage output by ignoring part of the enemy's Res. Fury or Fortress Defense Resistance boosts her core stats to make her overall stronger or exponentially increases her overall bulk to the point that she can take hits even better. Wings of Mercy allows her to teleport across the map to help get an injured ally out of the range of danger by dancing them out. Inheriting Distant Guard doubles its effect on top of the Silver Goblet while inheriting Close Guard allows her to run both skills simultaneously, giving her allies onmibulk so long as she is close enough to them.

Rinea is illustrated in the trading card game Fire Emblem Cipher with the following cards: 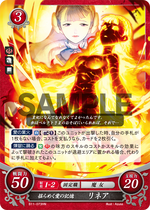 Rinea's name may be based on Linea, a feminine name of Scandinavian derivation, and its meaning is "lime" or "linden tree". It may also be based on the Scandinavian female name "Linnea" which is a flower.