Chapter 1: Zofia's Call (fought in Chapter 5: Together to the End)

Rinea is a non-playable character who appears exclusively in Fire Emblem Echoes: Shadows of Valentia.

Rinea is a noblewoman from an impoverished Rigelian house and is engaged to Berkut. Even within the Empire, she is renowned for her beauty, and the one person whom Berkut trusts without reserve. Rinea met Berkut at a royal ball. Despite the lesser nature of her noble house, Berkut was charmed by her beauty and offered to dance with her, thus beginning their romance.

During the events of Echoes, Rinea is first introduced when Alm's forces storm Desaix's fortress where Berkut was stationed. Rinea showed no interest in the battle as she detested violence. Berkut was content to sitting back and watching the battle unfold with her at his side.

After Alm kills Emperor Rudolf, it is revealed that Alm is Rudolf's true son, thus rendering Berkut's right to the throne invalid. In his frustration, Berkut enters the Duma Tower where he pleads to Duma for more power. Worried for Berkut, Rinea follows him into the Tower and tells Berkut that she does not care whether or not he is emperor, never desiring herself to be empress from the beginning, only to remain next to him for the rest of her days. Berkut takes this as a slight and drives him over the edge, offering Rinea's life as payment for power from Duma. Rinea's soul departs from her body and is engulfed in flames as Berkut holds her lifeless body. In pain from being forcefully transformed into a Witch and forced to obey Berkut, he makes Rinea attack Fernand, mortally wounding him. Shortly after, Alm's forces encounter Berkut and Rinea where the two forces clash and ends with Rinea and Berkut both defeated. As Berkut is on his death throes, Rinea's spirit, now free from Duma's influence, beckons for Berkut to join her in the afterlife where they can search for their "empire" together, so long as Berkut is content with having Rinea as his "empress." Berkut accepts her offer and departs alongside her into the afterlife.

While uncomfortable around most strangers, Rinea still tries to put up a pleasant and polite front. She seems to feel a lot of pressure to be an "acceptable" fiancee to Berkut, even though she dislikes public life. She often frets a lot about her choice of words and being what is considered appropriate in her department.

Being the daughter of a minor Rigelian noble family that is not well-off, financially or in social standing, her discomfort with court life is exacerbated. She does, however, love to dance, and also enjoys nature and being outdoors. While typically fairly soft-spoken, if Rinea has an opportunity to talk about something she likes, she will become much more animated and verbose, a trait she is rather ashamed of. The whole ordeal of war is as uncomfortable and alien to her as court life, but she sticks it out to stay by Berkut's side. He's the only person she opens up to, and conversely, Rinea is the only person Berkut opens up to.

Rinea's name may be based on Linea, a feminine name of Scandinavian derivation, and its meaning is "lime" or "linden tree". It may also be based on the Scandinavian female name "Linnea" which is a flower.

Concept artwork of Rinea from Echoes: Shadows of Valentia. 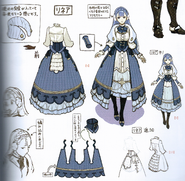 Concept artwork of Rinea from Echoes: Shadows of Valentia.

Rinea and Berkut artwork from Fire Emblem 0 (Cipher) by Aoji.

Rinea as a Witch in Fire Emblem 0 (Cipher). 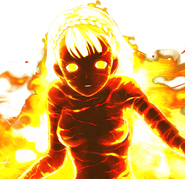 Rinea as a Witch. 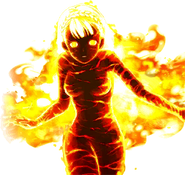