∞
[view]
Rinkah's Club (リンカの鬼金棒 Rinka no Oni Kanabō, lit. Rinka's Demon Metal Club) is a Club that is introduced in Fire Emblem Fates. Eponymously named after Rinkah, Rinkah's Club reflects the fiery, reckless temper of the character, possessing a high Critical rate that comes at the cost of dampening its wielder's ability to avoid critical attacks and perform double attacks.

The club is based on a kanabō (金棒), a long, iron club riddled with knobs. The kanabō was a common weapon amongst the oni (鬼), a race of huge demonic ogres in Japanese folklore. Kanabō were also sometimes used by samurai to to smash their opponents armor and bones. 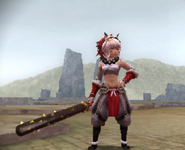