“When I saw Maeve for the first time, she was so weak she couldn't even walk, even though she was ten years old. It was a pathetic sight. I was still a child, too, but I seethed with anger at my father's crimes. Even so, I couldn't do anything but cry. Meriah and I embraced her, and the three of us cried together.”
—Rishel, in a conversation with Mahter

Rishel (リシュエル Rishueru) is a playable character from TearRing Saga: Utna Heroes Saga. He is the son of Naris and Rose, as well as the older brother of Meriah. He is also the successor of the Priesthood of Fire and the only character who is capable of wielding ☆Sunflame.

During their childhood, Rishel and Meriah lived in Rimne due to Naris's refusal to allow anyone else to enter the Temple of Water. Upon discovering that his father imprisoned Maeve in the temple with the intention of using her for his own ambitions, Rishel began to deeply hate him. When he first met Maeve, he became even more horrified by Naris's crimes and embraced her while crying. From that moment on, he began to see her as a younger sister. When he learned that his father was killed during a Zoan hunt, he did not grieve, although Meriah did because she was not aware of his crimes.

During the events of the game, Rishel is found unconscious and amnesiac in a river by Bud, who brings him to her home in order to care for him. Eventually, he recovers and asks Bud to make a promise to stop stealing. When Bud is taken as a hostage by Ahab, Rishel is forced to enter a battle against Holmes's forces. After Bud is rescued by Narsus, she convinces Rishel to betray Ahab and enlist in Holmes's army. Later in the game, he reunites with Meriah, Enteh, and Mahter. If both he and Meriah are sent with Runan's army after the second route split, he gives ☆Aura Rain to her.

In the ending, Rishel acknowledges that Enteh does not return his romantic feelings and accepts her love for Runan. When he and Meriah separate, he tells her that she can visit him, but only if Enteh also comes with her. Afterwards, he asks Mahter to join him in rebuilding the Temple of Fire, which she agrees to, despite not necessarily requiting his love for her.

He appears as an enemy unit in Map 23. Have Bud speak to him to recruit him.

Rishel joins later in the game at a low level. He will have to be trained up to hold his own, but doing so is not too difficult because of his exclusive tome, ☆Sunflame, which provides +10 Defense when equipped. His stats are probably the best among the offensive mages who join the player's army because of his superior HP, Magic, Defense and Weapon Level. He is worth the effort to train and will be a valuable asset to the team.

“Using magic for this purpose... Forgive me, Grandfather...”
—Rishel's battle quote as an enemy in Map 23 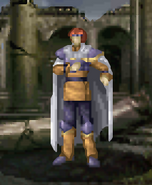 Rishel's battle model as a Mage. 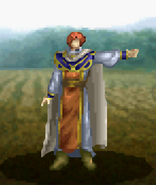