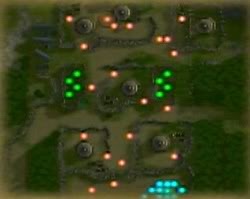 Easy: Set all objects on fire within 18 turns

Normal: Set all objects on fire within 15 turns

Chapter script
[view]
“Well, well... Sorry to drop in unannounced. We thought it best to hunt the strongest prey first.”
—Ranulf to General Zelgius before fighting

River Crossing (渡河作戦 Toka sakusen) is the third chapter of Part 3 in Fire Emblem: Radiant Dawn. Before this chapter, a cinema showing the Laguz Alliance crossing the Ribarhn River will display. The objective of this chapter is to set aflame a number of crates. Haar is often used to do most of this job thanks to his great movement. Bonus Experience is granted for letting the two senators that will appear live and for setting the horses free.

A curious feature of this chapter is that the screen and the environment in general will look hotter and brighter the more crates are burning.

The Laguz Alliance knows that they must cross the Ribahn River to be a real threat to Begnion; however, this is easier said than done. This way, Soren makes a plan to make the Beast Tribes cross the river without having too much casualties. He knows Begnion soldiers' morale is kept high by the faith they have in General Zelgius, so he tells Ranulf to take an elite force to strike the back of the army and make some disruption among their leaders. Meanwhile, the Greil Mercenaries attack Begnion's base camp, where many senators are, this causing them to order a retreat that Zelgius will be forced to obey. The transporting of the Greil Mercenaries and Ranulf's Elite force is made by the Hawk Tribe, who also takes care to deal with Begnion's Dracoknights, Pegasus Knights, and Ballista.

The apostle Sanaki, empress of the Begnion empire, does not wish war with the laguz and searches feverishly for a peaceful resolution. However, many imperial senators see the war not only as a means to expand their own influence but also as a convenient opportunity to exterminate the laguz once and for all. These ambitious senators meet with Vice-Minister Lekain and vigorously advocate a full-scale war. Having seen their homeland invaded, Begnion citizens desiring peace are now few and far between. Against the apostle's wishes, Begnion's military is now fully committed to the war with the laguz. Zelgius easily escapes the talons of the bird tribes meant to delay him and the Central Army. He arrives at the Sestohl Plains to reinforce his weakened allies. The laguz forces are surprised by the sudden appearance of this new enemy and seek counsel from Ranulf of Gallia. Ranulf orders a retreat with all speed, thus avoiding a full-on engagement with the Central Army. General Zelgius chooses not to pursue the fleeing Gallian army. Instead, he orders his army to hold position on the eastern banks of the Ribahn. Divided by the river, the two armies are deadlocked, able to do little more than glare at one another in hatred.