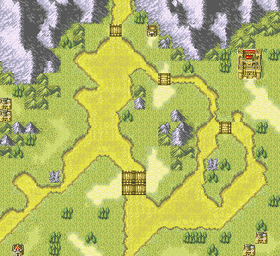 Chapter script
[view]
“The Sacred Stones that defeated the Demon King radiate a constant and dazzling light. The Sacred Stones are the only power against the dark, the last hope of humanity. It is only natural that evil would seek to destroy the Sacred Stones... There can be no other force behind this attempt to gain the stones. A childhood friend appears before Eirika/Ephraim.”
—Opening Narration

River of Regrets is Chapter 17 of Fire Emblem: The Sacred Stones.

On the World Map

After completing, monsters may attack here.

Fog of War may occur.