Road (道路) is a Terrain type in the Fire Emblem series. In most games it did nothing. In Fire Emblem: Genealogy of the Holy War, however, it decreased player units Evade by -10 but it granted extra movement to units that walked on it, so it really helped low movement units like Mages and Knights keep up with mounted units. The same could be said for mounted units being able to move even further. 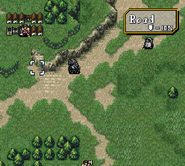