View source
watch 26:29
'Fire Emblem: Path of Radiance' - Chapter 4
Do you like this video?
Play Sound 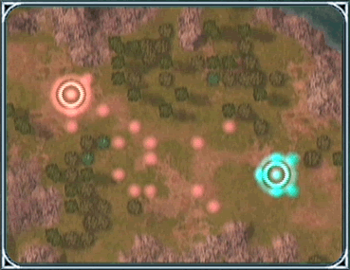 Roadside Battle is chapter 4 of Fire Emblem: Path of Radiance, considered the first somewhat difficult battle of the game.

This is the first battle to have a large number of enemies; they are also stronger than those encountered in previous chapters.

Ike, Titania, Shinon, Rhys, Gatrie, and, for the first time, Soren are deployed in this chapter.

At the top of the map, near the deployment area, is a cluster of thickets and some trees that could be used defensively by reducing enemies' movement range and granting 10 additional avoid for player units.

In this battle most of the player's units will be able to hold their own and take multiple enemy attacks before they need healing. These units would be Titania, Shinon, Ike, and Gatrie. One of the biggest things to be wary of is Rhys and Soren.

Now in almost all battles, survival comes before all else. If a character dies in a Fire Emblem game they are gone forever (save a few circumstances outside of Path Of Radiance). In this battle you will have to be careful with Soren and Rhys, these two units are magic wielders, and thus have higher resistance as opposed to defense. They will also be at extremely low levels meaning in only one or two hits they can easily die.

Rhys is important as he is pretty much the only healer you will have early on in the game. Also when well trained, Soren can become a deadly weapon of mass magical destruction later in the game. So keeping these two alive is of utmost importance.

On Easy and Normal modes a player can slowly advance their troops without too much worry. They can easily keep a frontline of Titania, Shinon, Ike and Gatrie while Rhys stays behind healing major wounds and Soren can pick off enemies with only a few more Hit Points left to gain experience. Since Shinon is a Sniper, he is very good at avoiding attacks and has quite decent defense, so the player need not worry about him being attacked, although he notably can not counter direct attacks.

On Hard (and Maniac) Mode the battle is drastically different. The player will be faced with an absolutely massive amount of enemy forces. After the relatively easy first few battles, this could leave a player wondering how they could possibly win. The battle is difficult though it is very winnable.

As mentioned earlier, the upper part of the map has a series of Thickets and Trees that can be used tactically. In the harder modes it is suggested that a player uses these features of the map to play the first few turns defensively.

A player can set up a phalandex formation in the thickets and trees with Gatrie, Ike, Titania, and Shinon on the perimeter and Soren and Rhys inside. Using this system the player can wait as the first few waves of enemies advance on their positions. The enemy forces, their movement limited by the thickets and trees will then slowly be diminished in number as they attack the player's units.

Once all of the advancing units are killed there should be considerably less enemy units left to battle. The player can then slowly advance on the Boss and the remaining forces. The last of the enemy units can be 'baited' by putting a player controlled unit within their range and letting them charge up and attack them. Using this it should not take long to defeat the few remaining enemy units.

In this battle you will gain control of Soren. Soren is the Greil Mercenaries' Tactician and a Mage. Soren is the first magic using unit you will receive in the game and thus is a valuable unit to have on hand.

Soren is also considered to be one of if not the most powerful Mage/Sage in Fire Emblem: Path Of Radiance. If trained to his maximum level (which you have 25 chapters to do) he can, with a bit of luck, easily max out his speed, skill, magic and resistance stats. This fact alone makes him a powerful unit to have on board. Also upon promotion to Sage, Soren can gain the ability to use Staves or Knives, although staves is suggested.

Soren will require some special attention when he is first received. He comes at level 1, a ways behind the eight-ball. He can easily be trained though if the player allows him to finish off foes that have already been lowered to low HP. When first received, he, being a Mage, will easily die in only one or two physical attacks so he will require protection from such attacks. Later on though he will be able to easily dodge and survive most attacks.